Are you searching for inexpensive Rockport elopement packages that will allow you to have your winter wedding covered in a way that is both detailed and unique? Canada elopement photographer Viara Mileva would love to hear from you if you are preparing to organize a simple occasion that might be a micro, informal, intimate, winter, or another type of non-traditional marriage celebration. The following small wedding took place at a very unique wedding venue in Rockport, in the heart of Thousand Islands, but Viara is available for intimate weddings in or around all of Ontario, Canada. For more details about having this Ontario candid photographer easily document your small wedding, contact Viara Mileva promptly. 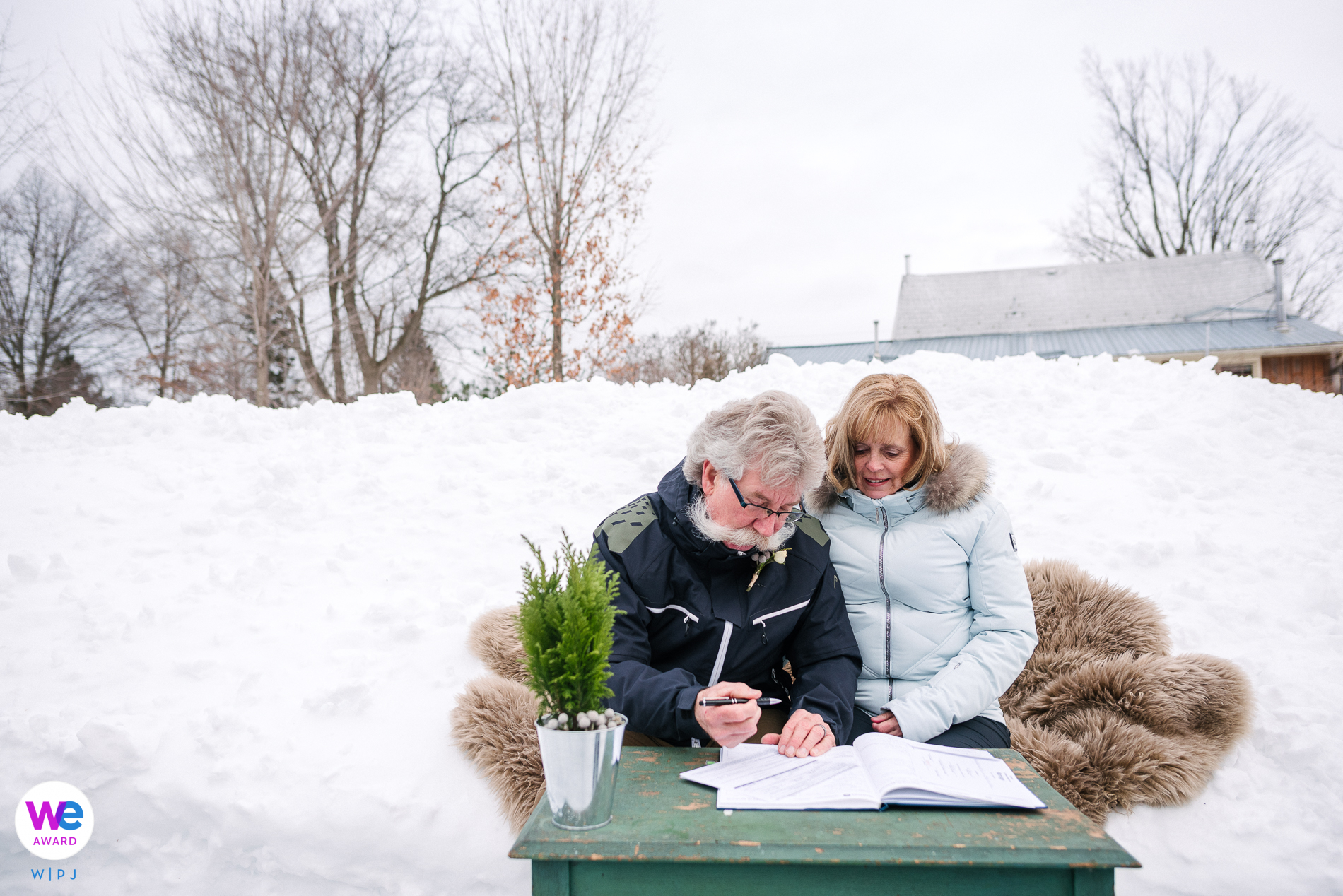 The couple signs their papers, sitting on a faux-fur blanket laid in a crevice in the snow, just at the edge of the ice rink.

This was a winter elopement unlike any I've seen or photographed before. The couple was not interested in a big wedding, and it just so happened that we weren't allowed to have one anyway.

Pam and Stephen have been together nineteen years. Because they'd both "been there done that" with the big wedding, their vision for this was very simple and clear: gather with their two sons and their son's girlfriend for an outdoor ceremony on the ice at Rockport Barn, take some family photos, and have a cozy dinner.

They worked with a local wedding planner (Heather of Bowtie Services) so that their elopement wouldn't be a series of stressful decisions. In the end, all the details were taken care of, and the couple and their children had a really wonderful afternoon together.

The elopement started at the Boathouse Inn, where the couple got ready. Pam did not wear a dress. Instead, she opted for a beautiful black ski sweater, and over top she wore a ski jacket and pants.

After they were dressed, we strolled through Rockport Village, taking in the beautiful wintery scene. The couple visits this place often, so it holds special meaning to them.

Then we headed to the ceremony venue: Rockport Barn, a short drive away from their Inn. The ceremony was held right on the ice, which made for slippery conditions, but it was super unique and very fun to shoot.

Once they were legally married, and all the papers were signed, they got to enjoy the fire.

After that, a delicious dinner awaited them inside the cozy barn.

This was not a conventional elopement in any sense of the word. It was magical and special in every way and incorporated everything the couple wished for.

(well, except that they didn't get to go ice-skating on the rink after all. They had brought their skates, but after the ceremony, we all decided that the ice was a little too slippery, and the cheese fondue was beckoning anyway!) 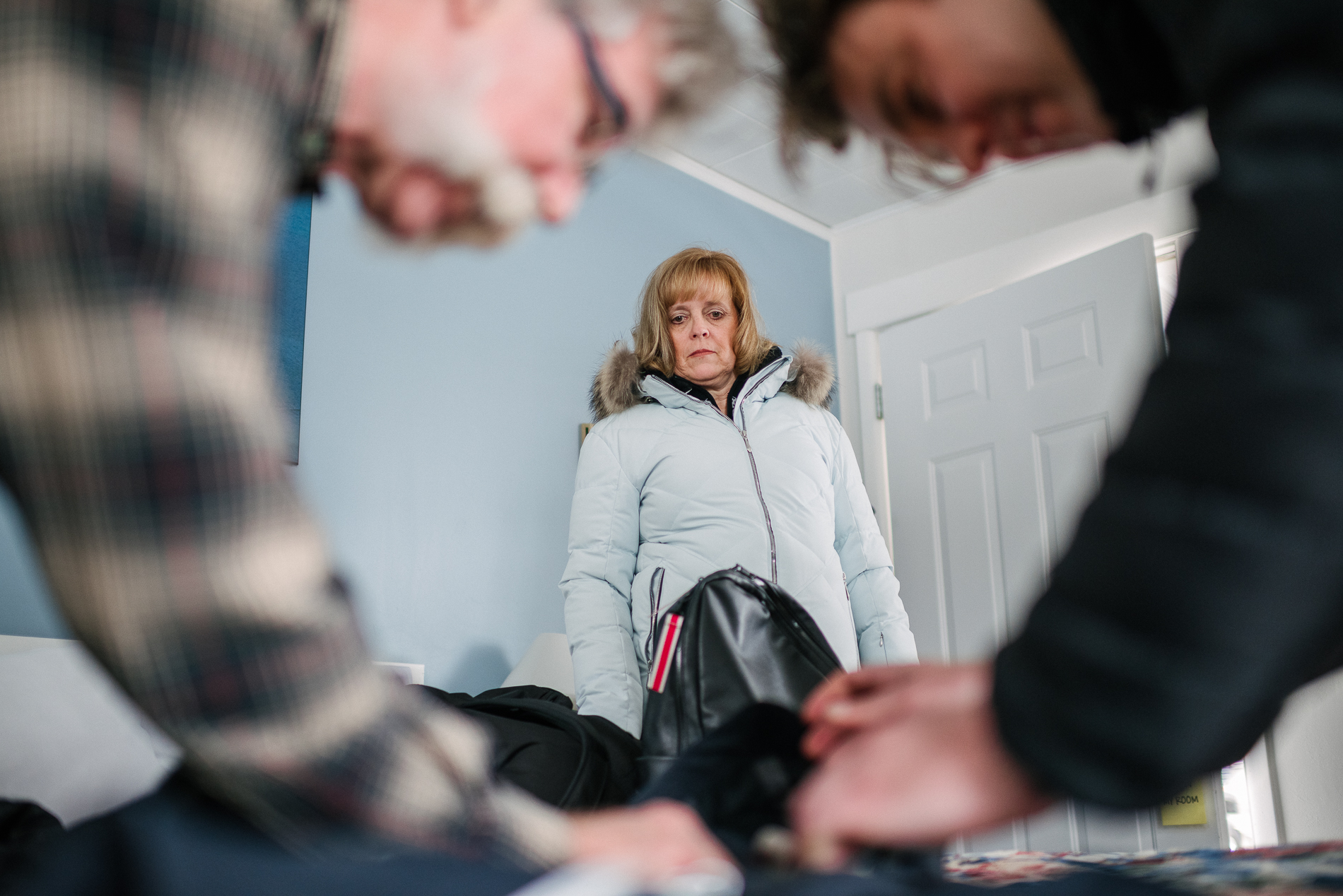 Pam looks on as Stephen and his son try to figure out the boutonniere Stephen will be wearing on his jacket. 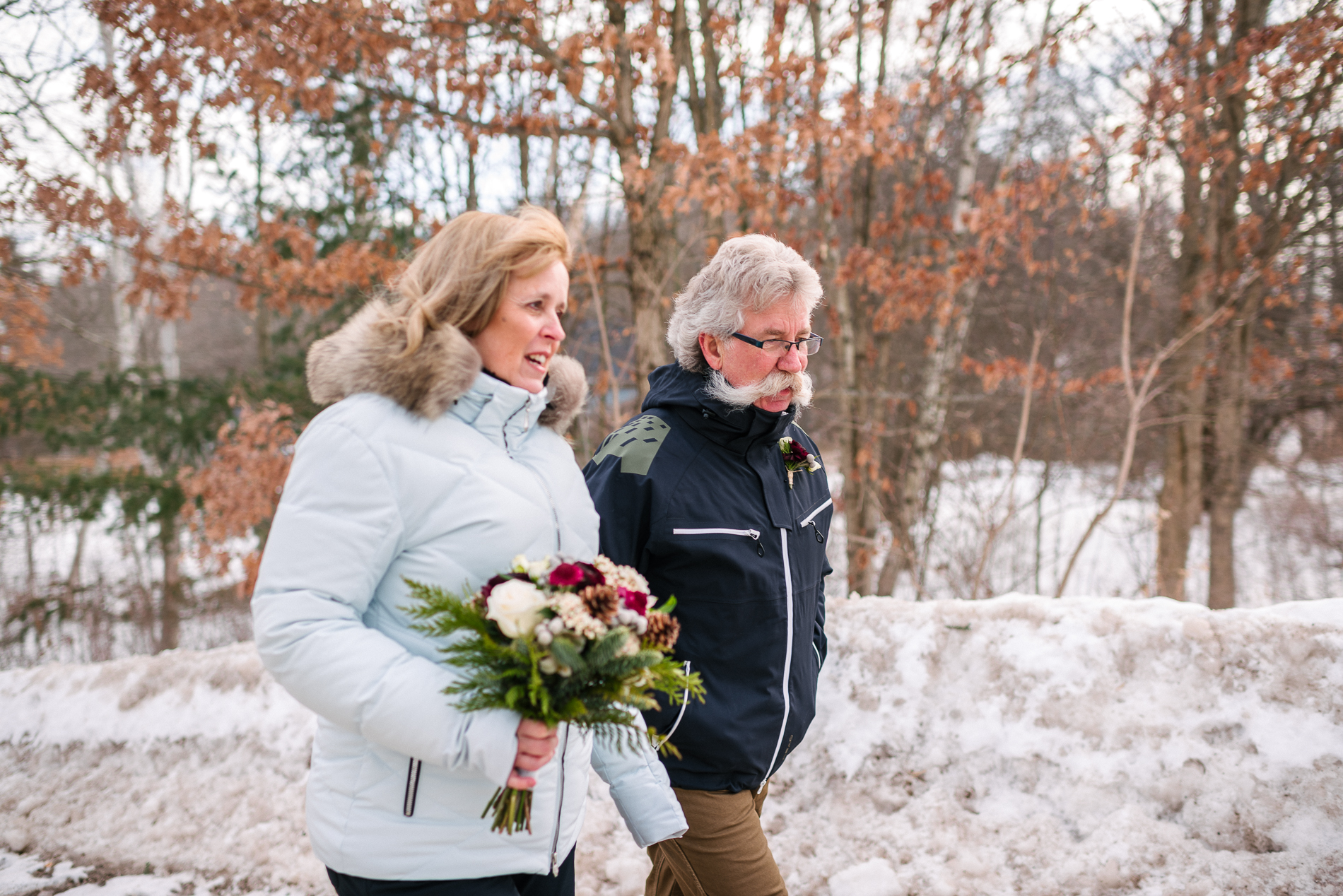 These two love the outdoors. They like to bike and hike and ski. During their winter wedding, they went for a walk through Rockport Village, and we visited some of their favorite spots to take photos.

Pam's bouquet had a very special necklace, holding the ashes of Pam's father, a must for her on her wedding day. 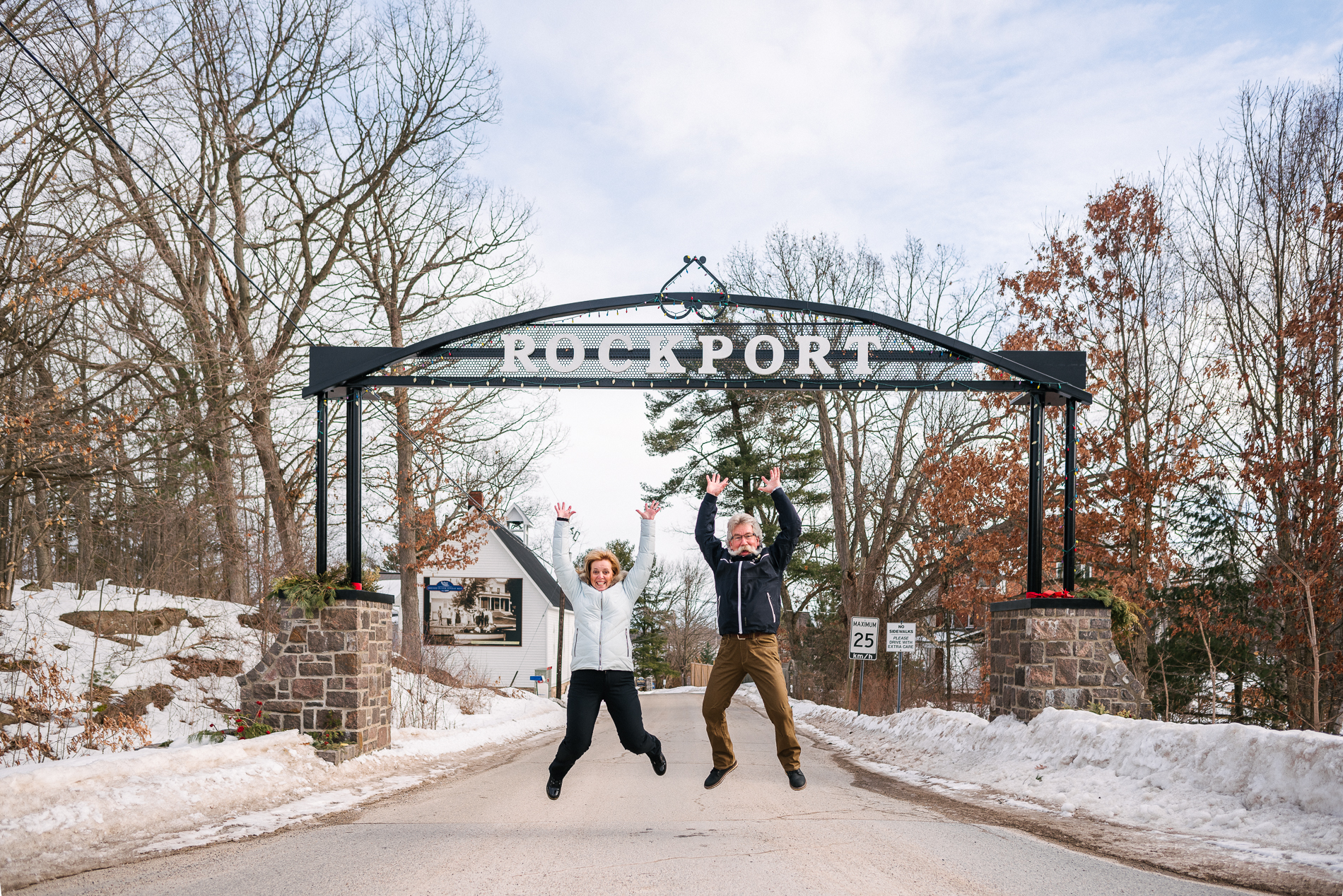 Pam and Stephen love Rockport, and they often take photographs of themselves jumping - in Rockport, and in the other places they love to visit. So we had to make a jumping photo.

Rockport Barn Wedding Venue Image from Mallorytown, ON, Canada of the bride absolutely beaming at the words of the officiant 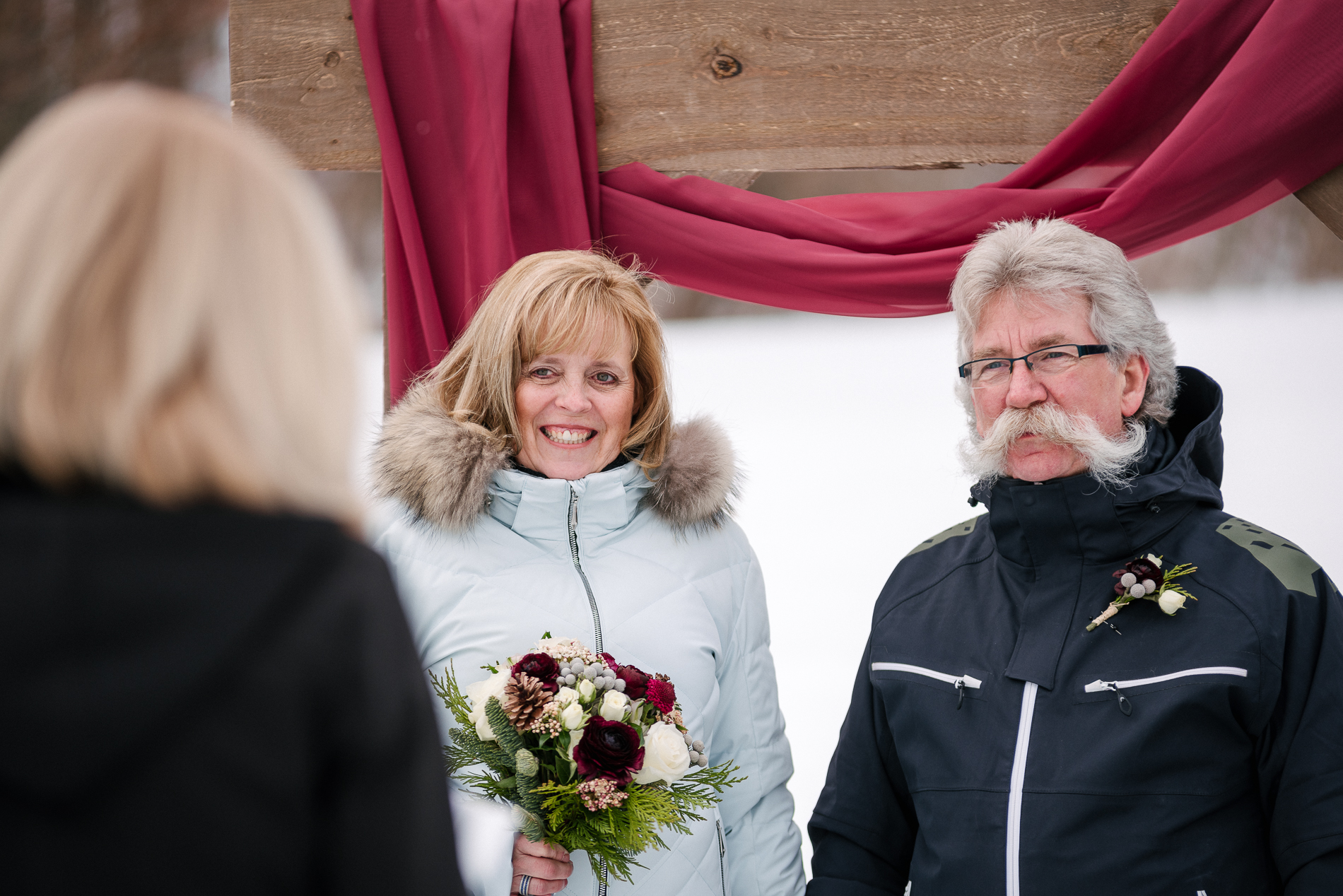 Pam absolutely beams at the words of the officiant during the outdoor wedding ceremony. 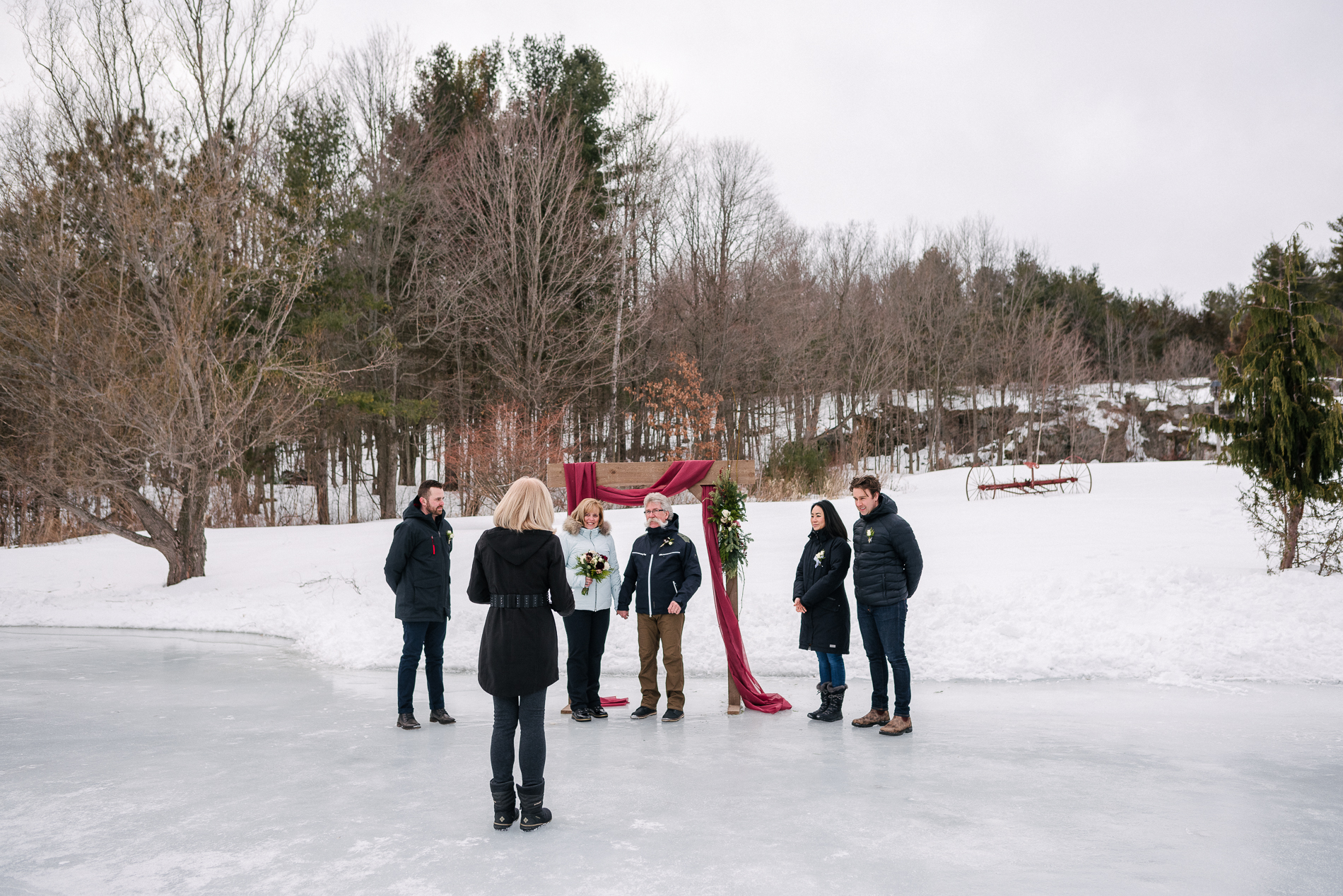 The ceremony is held right on the ice! Rockport Barn offers ice-skating in winter, and the rink makes for a unique wedding ceremony locale. Slippery though! Photographers need to be careful :)

Rockport Barn, Rockport, ON Wedding Photo from After the ceremony as the family gathers outside the barn 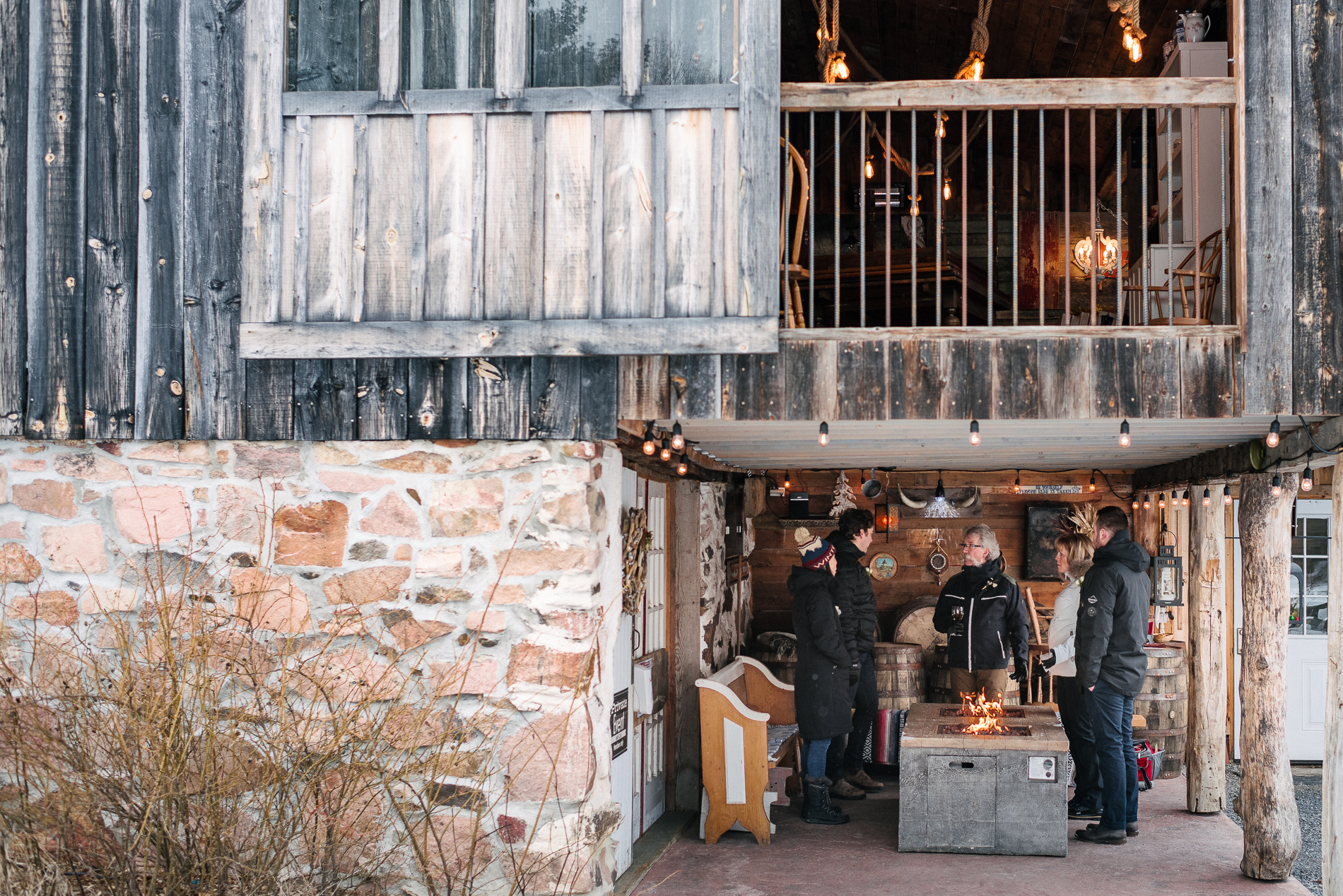 After the ceremony, the family gathers outside the barn while dinner is being prepared indoors. 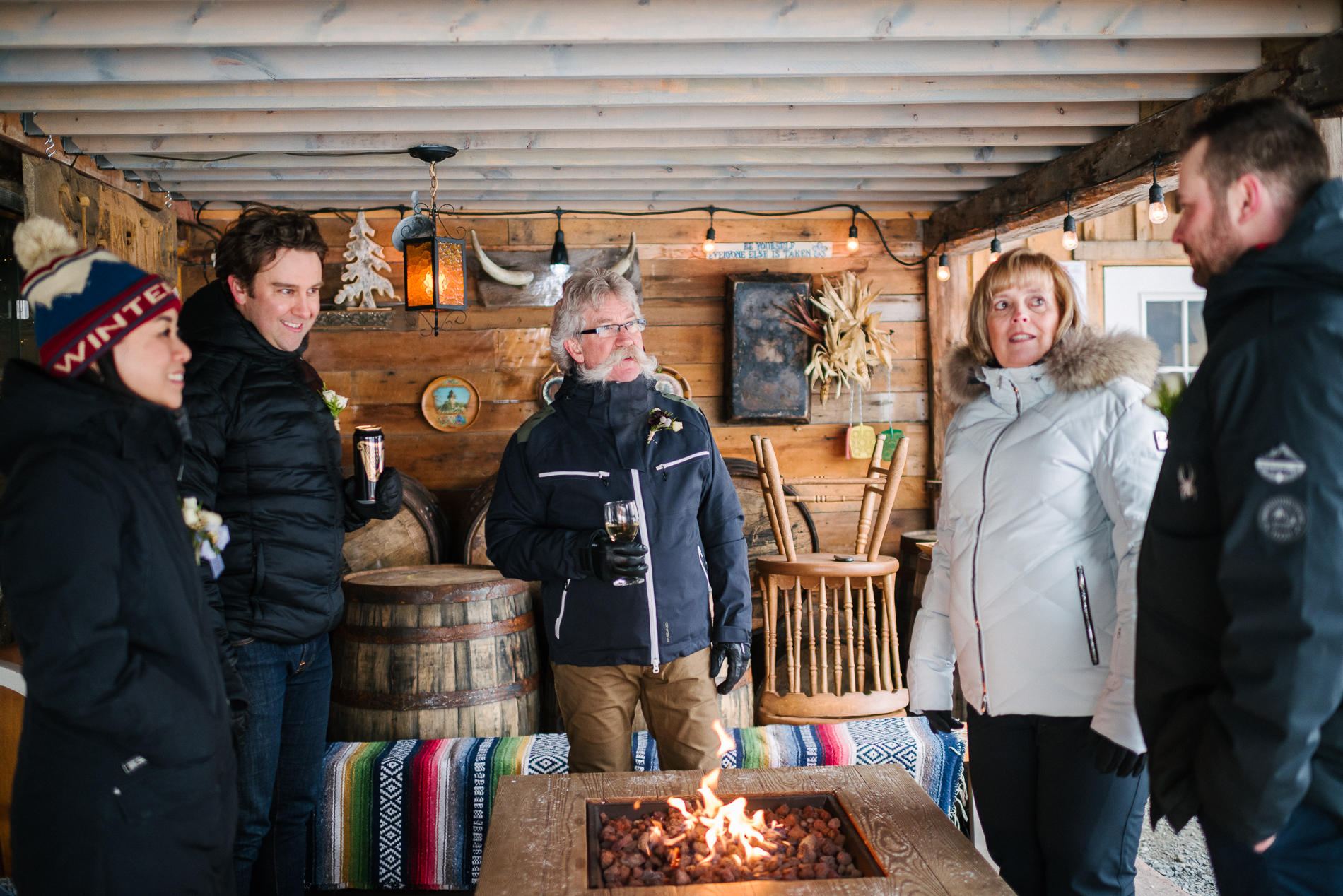 The couple celebrates with their family, over drinks and snacks around the firepit. 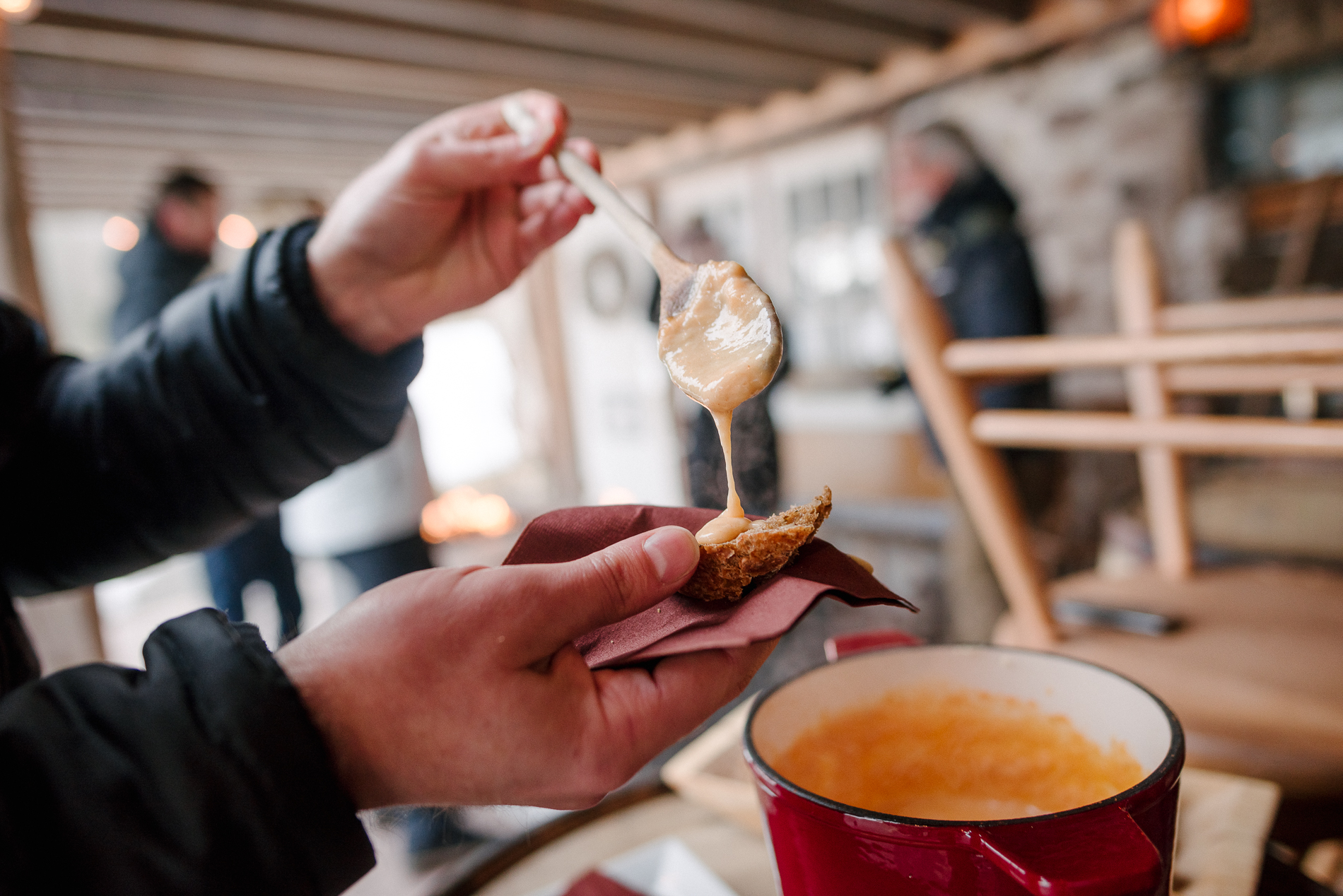 One of the couple's sons takes a sampling of the fondue, which is steaming in the chilly winter air.