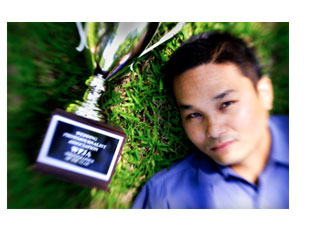 The Wedding Photojournalism Association (WPJA) proudly honors Huy Nguyen with its distinguished 2005 Photographer of the Year Award. Leading up to this pre-eminent salute, Nguyen received first-place awards in WPJA competitions in the “Food,” “Cake Cutting,” “Portrait of Bride,” “Reception,” “Action” and “Kids” categories. What continues to draw the attention of the judges and all who come across his work? Aside from his innate visual gift, Nguyen’s images are characteristically quirky, unexpected and direct.

Based in Addison, Texas, Nguyen earned his stripes in photojournalism at the Dallas Morning News, where he worked as staff photographer for six years. His images have appeared in Newsweek, Sports Illustrated, Elle, US News & World Report, the Washington Post, the New York Times, the Chicago Tribune, the Los Angeles Times, and a number of wedding publications. In March 2004, Nguyen left the Dallas Morning News to devote himself full time to wedding photojournalism. Since then, he has translated his journalism skills into the documentation of more than 60 wedding stories.

Asked whether or not Nguyen can create spectacular pictures at every wedding? “Definitely,” he explains. “Great images can be made anytime and anywhere.” This may explain why when asked for whom he ultimately shoots, he admits, “I shoot to make myself happy; I shoot to my standard.” Nguyen’s personal barometer challenges him whenever and wherever. For that reason, those preparing to walk ‘the aisle’ flock to him. They trust in his vision and judgment, completely. Particularly those with the most discriminating tastes see in his photographs an exceptionally high aesthetic standard. They understand his work, and they know that their expectations will be met in the form of uncompromising, beautiful images.

An active photographer, Nguyen thoroughly works every aspect and angle of the wedding, constantly thinking, planning and staying aware of both the quantity and quality of light. He uses on- and off-camera strobes and flashes, letting the light enhance but never overwhelm the subjects. “I want it to flow without a big production,” he explains. Soft-spoken and unobtrusive, his modus operandi is to maneuver throughout each event inconspicuously. “I don’t want people to feel that they’re on stage, so I’ll sometimes sacrifice the lighting for privacy’s sake.”

For Nguyen, what makes an exquisite wedding image is one that anyone, not only those at the wedding, can appreciate and connect with. “The picture is my first priority,” he says, “and it just happens to be at a wedding.” His ideal subjects are confident, natural and reasonable about the limitations of the camera and the circumstances. Not surprisingly, Nguyen prefers close-up work, as it is at the core of his photojournalism background.

Though, in the end, he says, “It’s up to me to win the game and come through with more wins than losses.” Clearly unafraid of failure and of taking risks, Nguyen finds the most precious rewards in a great wedding photograph.

By Lisa Evenson for the Wedding Photojournalist Association