Are you searching for reasonably priced Nevada elopement packages that will allow you to have your forest wedding covered in a way that is both detailed and honest? Incline Village photojournalism-style elopement photographer Lauren Lindley would love to hear from you if you are planning to host a simple event that might be an adventure, informal, mountain, outdoor, or another type of non-traditional wedding. The following small wedding took place at Incline Village, located on the East Shore of Lake Tahoe, but Lauren is available for intimate weddings in or around all of Nevada. For more information about having this North Lake Tahoe documentary-style photographer expertly document your elopement, contact Lauren Lindley today.

Wedding Photo from an Incline Village, NV elopement ceremony of The bride and groom sharing a first kiss 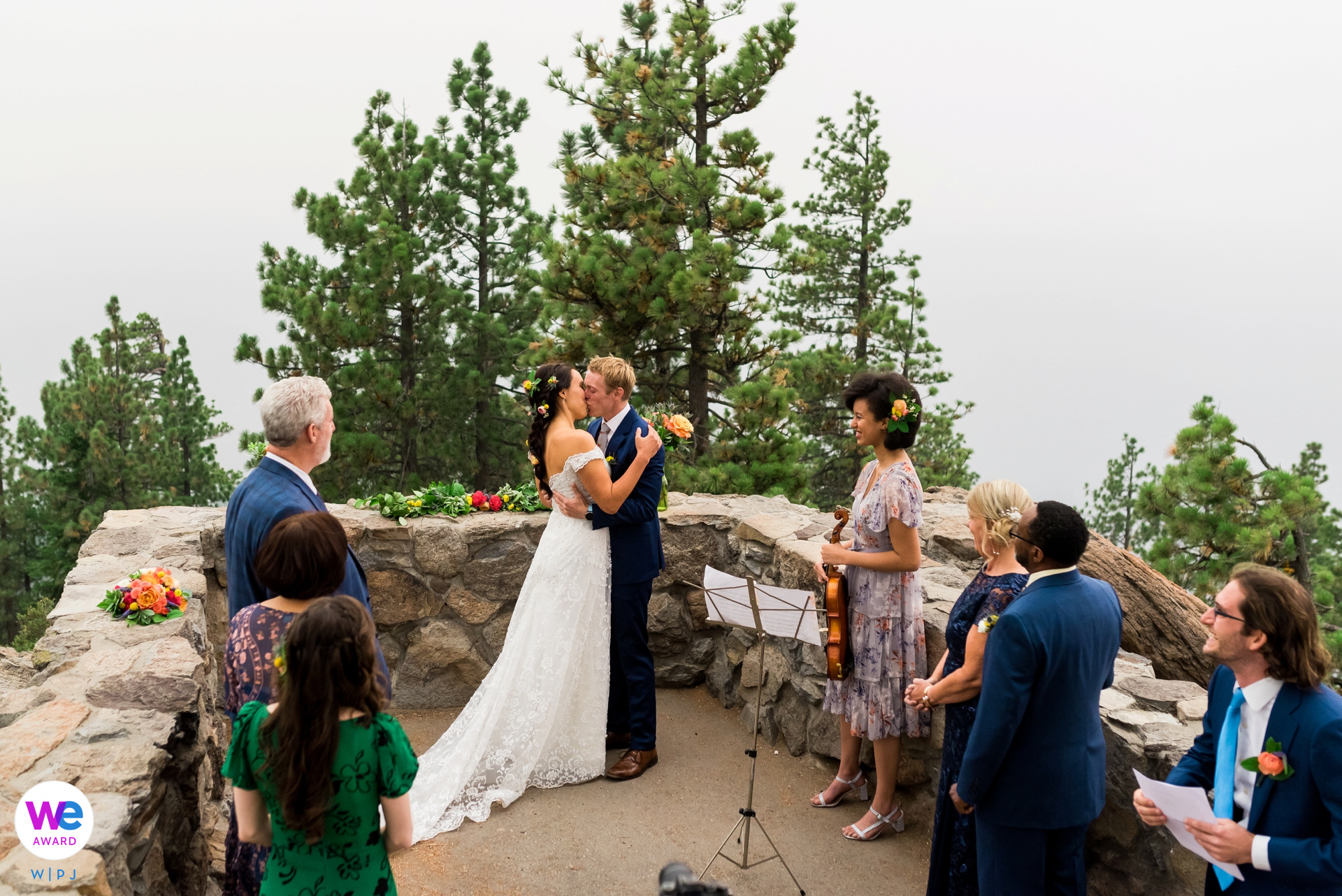 The bride and groom share a first kiss at the end of their ceremony.

Jina, Lucas, and I originally bonded over bikes: a love of them, the desire to ride them as much as possible, and the idea that bikes belong in every part of your life. This includes your wedding! Their original plan was to get married at Roundhill Pines, have everyone bike down the bike path to a cocktail hour at the Nevada beach pavilion, and ultimately, end up in the backyard of the Basecamp Hotel, which is one of my most favorite wedding venues in South Lake Tahoe. I think they were sold on me when they asked me how I would plan on getting from one venue to the other and I responded with enthusiasm, “ON A BIKE OF COURSE!”

COVID, of course, has different plans for all of us though.  Over the summer, their wedding went through multiple iterations of new ideas: a beach BBQ, a smaller backyard party, a dinner at a restaurant, among others.  Eventually, Jina and Lucas decided, much like my other COVID couples, that they just wanted to get married.

The day that they slated for their intimate Stateline Lookout elopement, near their family cabin in North Lake Tahoe, also had other plans for them: the entire basin was socked in with smoke from aggressive and widespread wildfires across the state.  Their spirits were hardly dampened though and I was so impressed with their positivity, infectious energy, and happiness.

Elopement Image from Incline Village, NV of The groom and his immediate family members hiking up to the Stateline Lookout 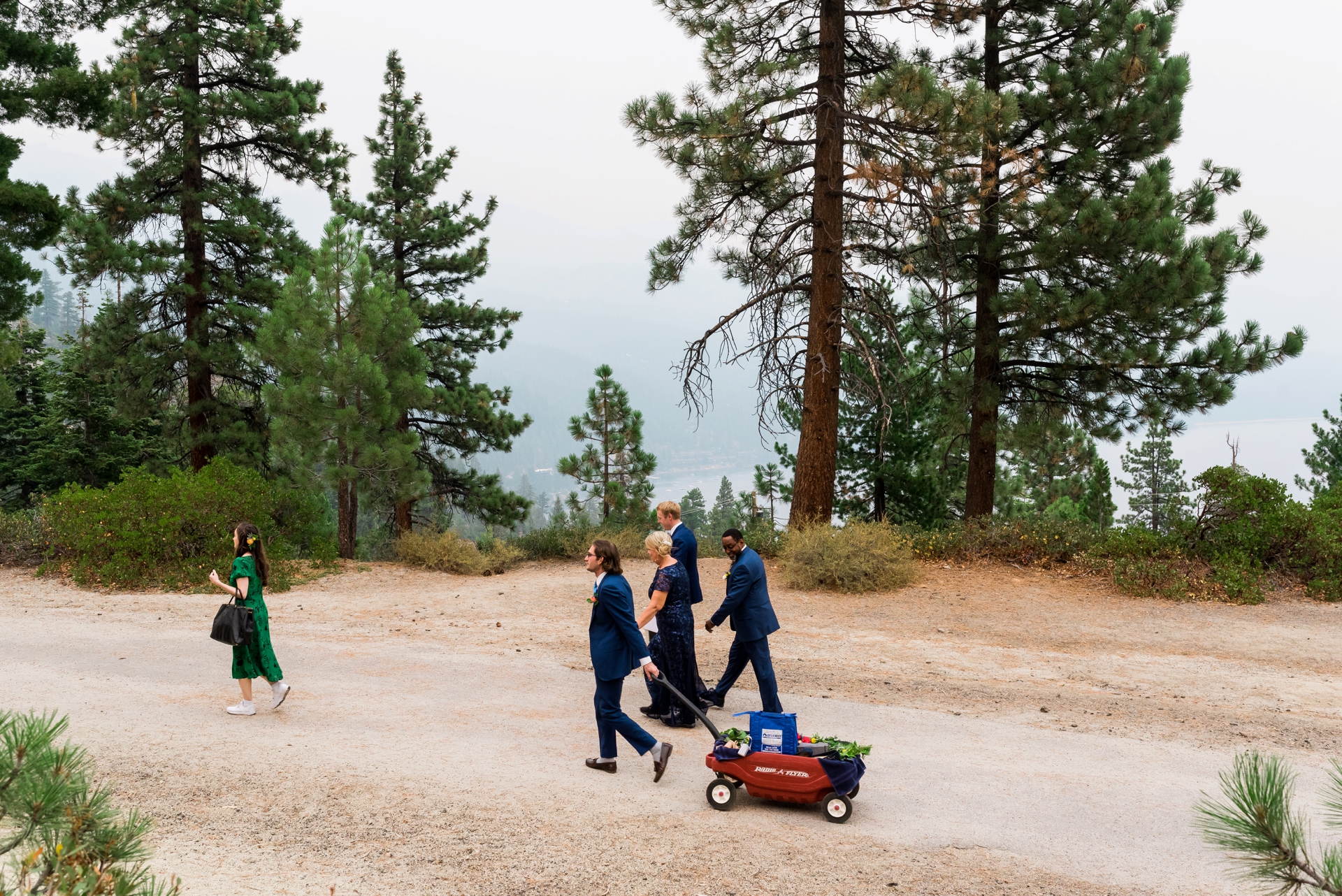 The groom and his immediate family members hike up to the Stateline Lookout outside of Incline Village, NV with a wagon full of details, champagne, and flowers for his elopement ceremony. 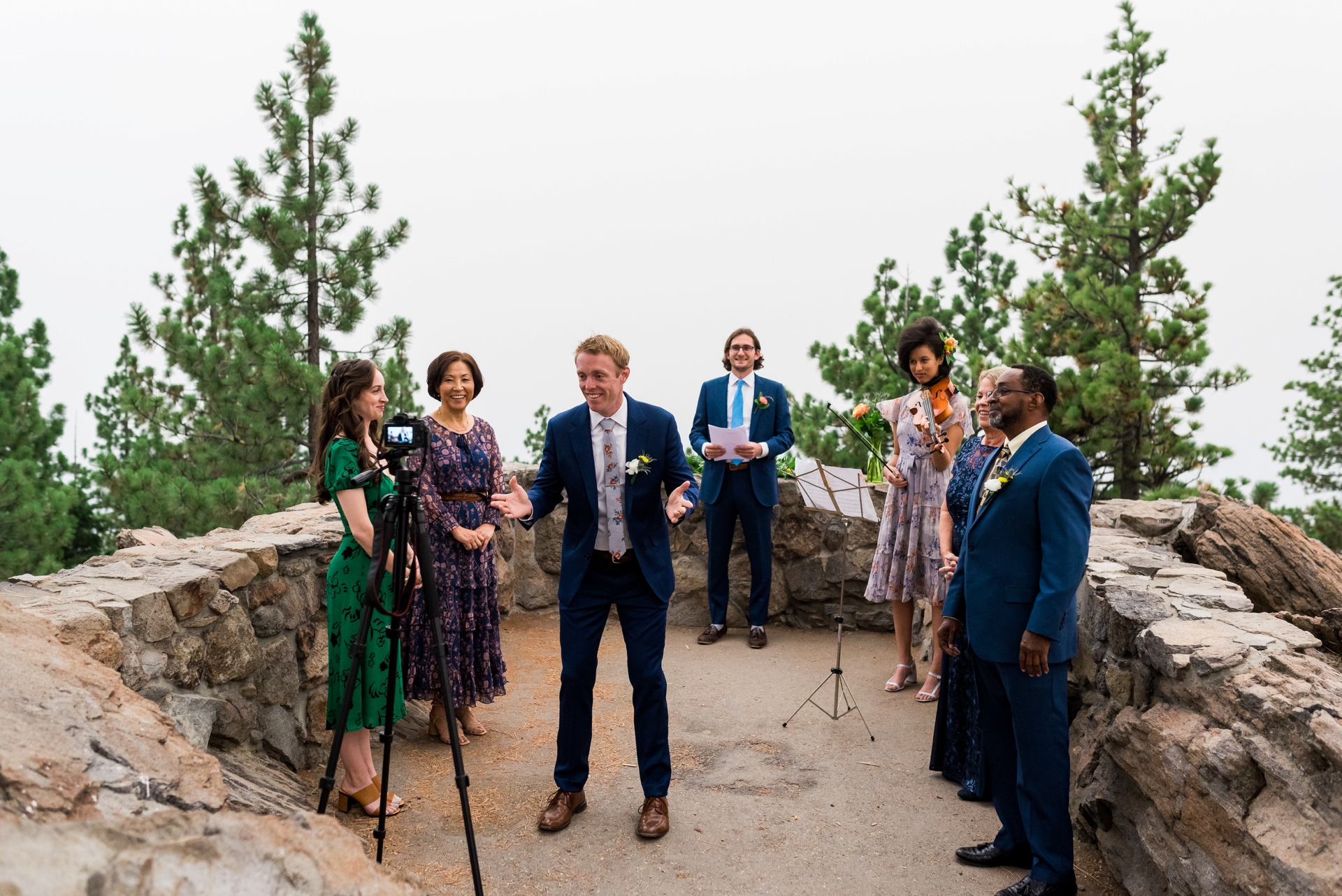 The groom, surrounded by his and his fiance's immediate family, speaks to his grandparents in the video recording he is making to send to them since they couldn't fly due to COVID restrictions. 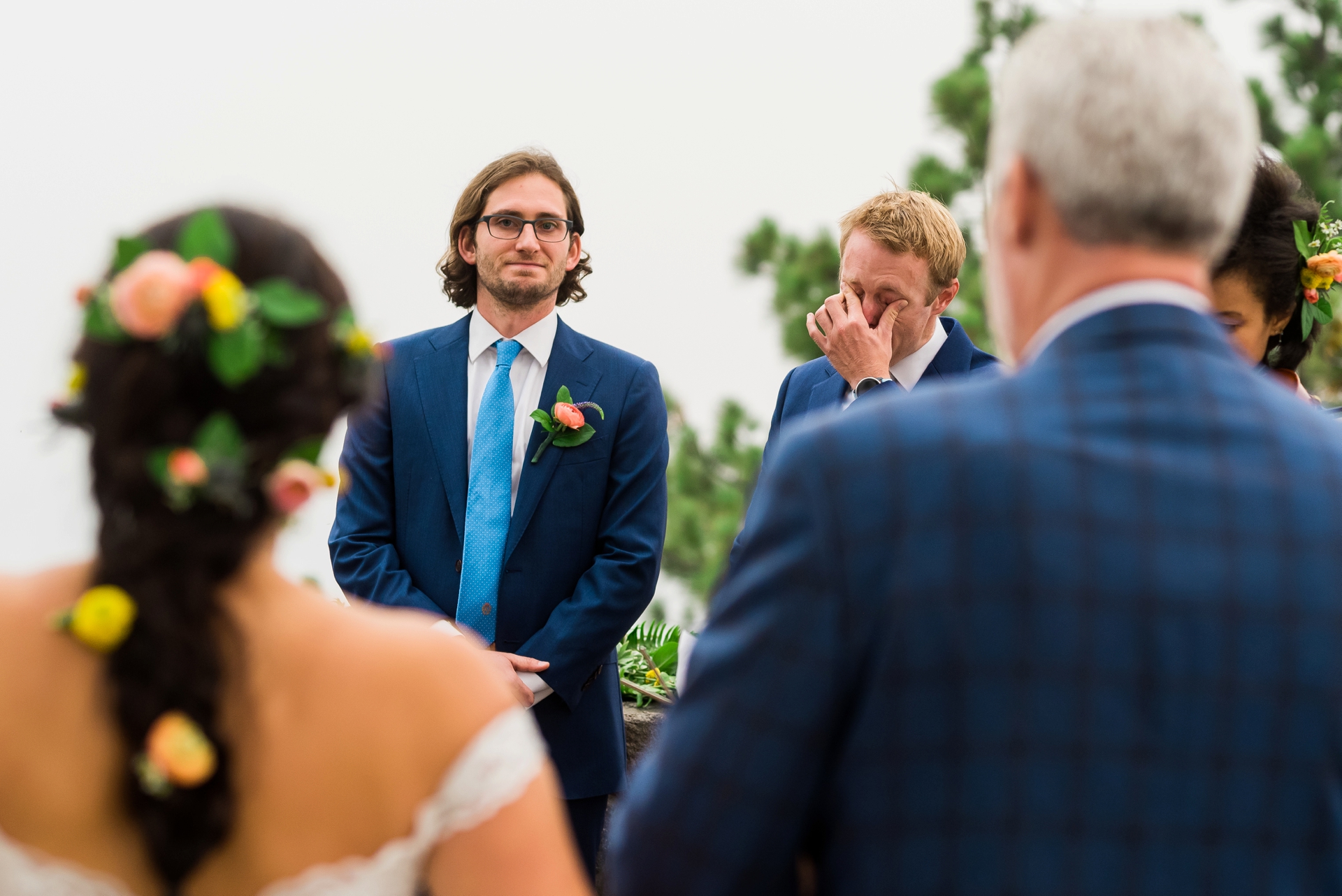 The groom has an emotional moment as his bride proceeds down the "aisle" at their informal elopement at the top of a lookout over Lake Tahoe, NV. 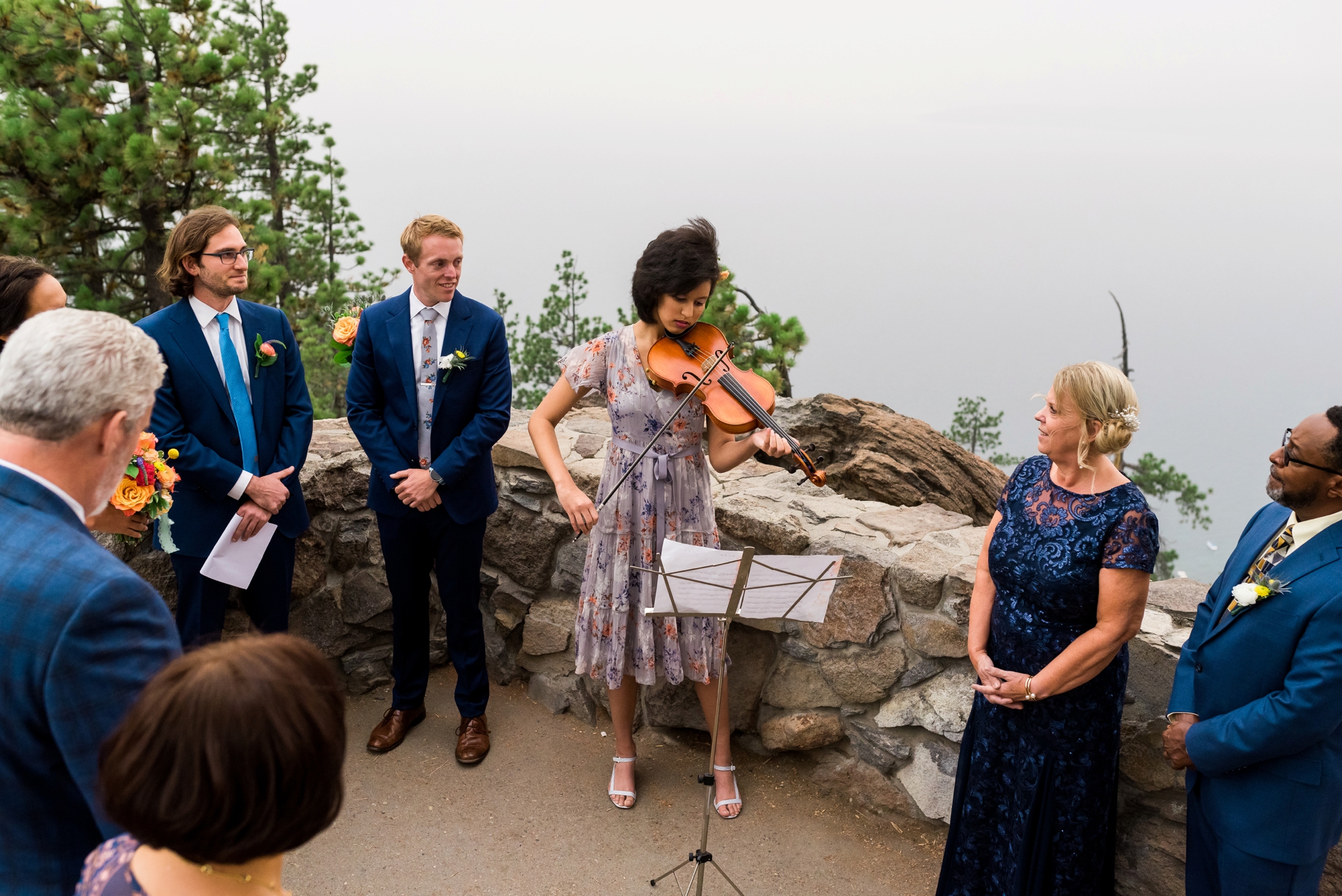 A family member plays the violin for the elopement while the overlook behind her is shrouded in wildfire smoke. 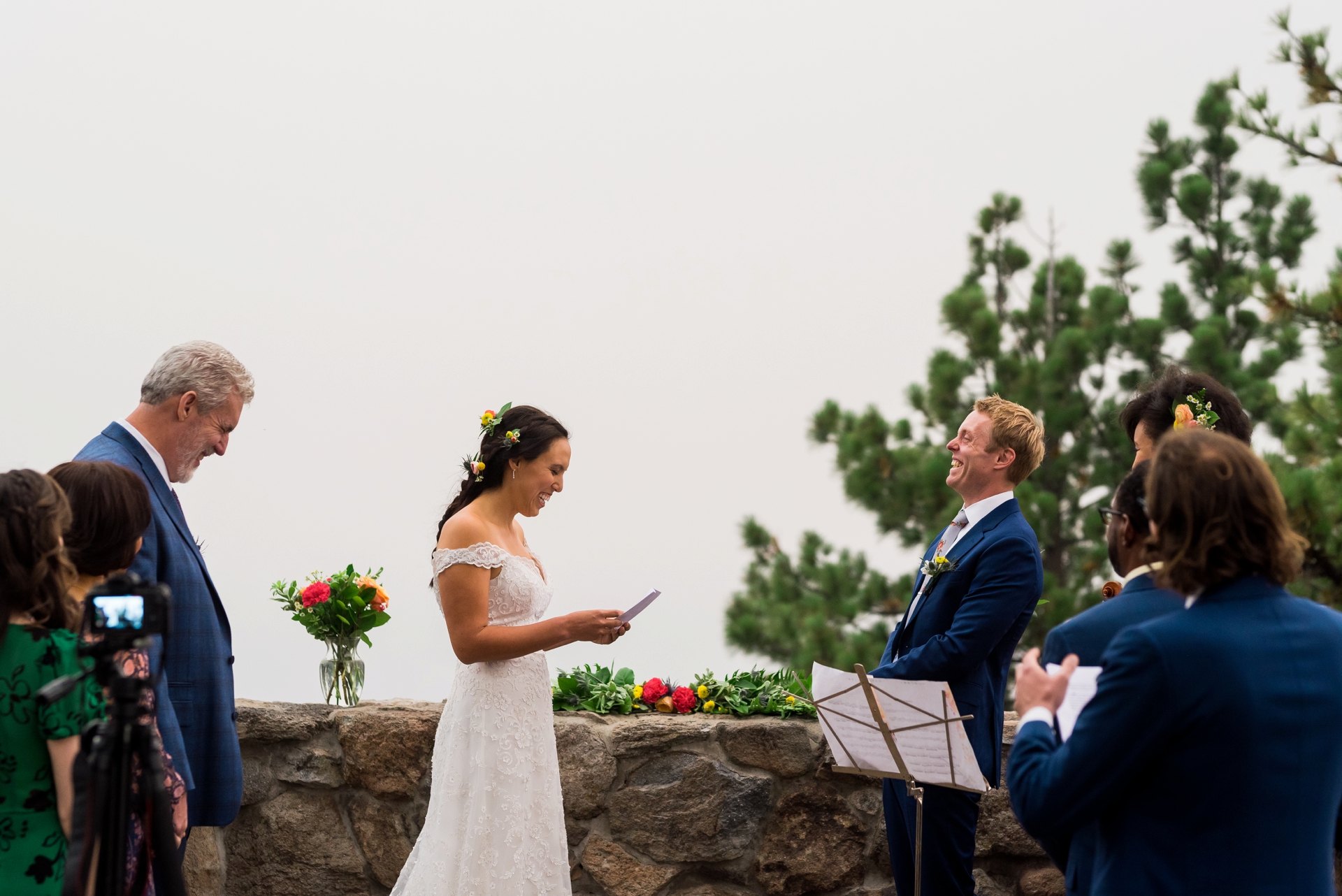 The bride and groom laugh at a shared moment during their vows.

Nevada Elopement image showing The rings are exchanged during their private wedding at the top of an overlook at Lake Tahoe, NV 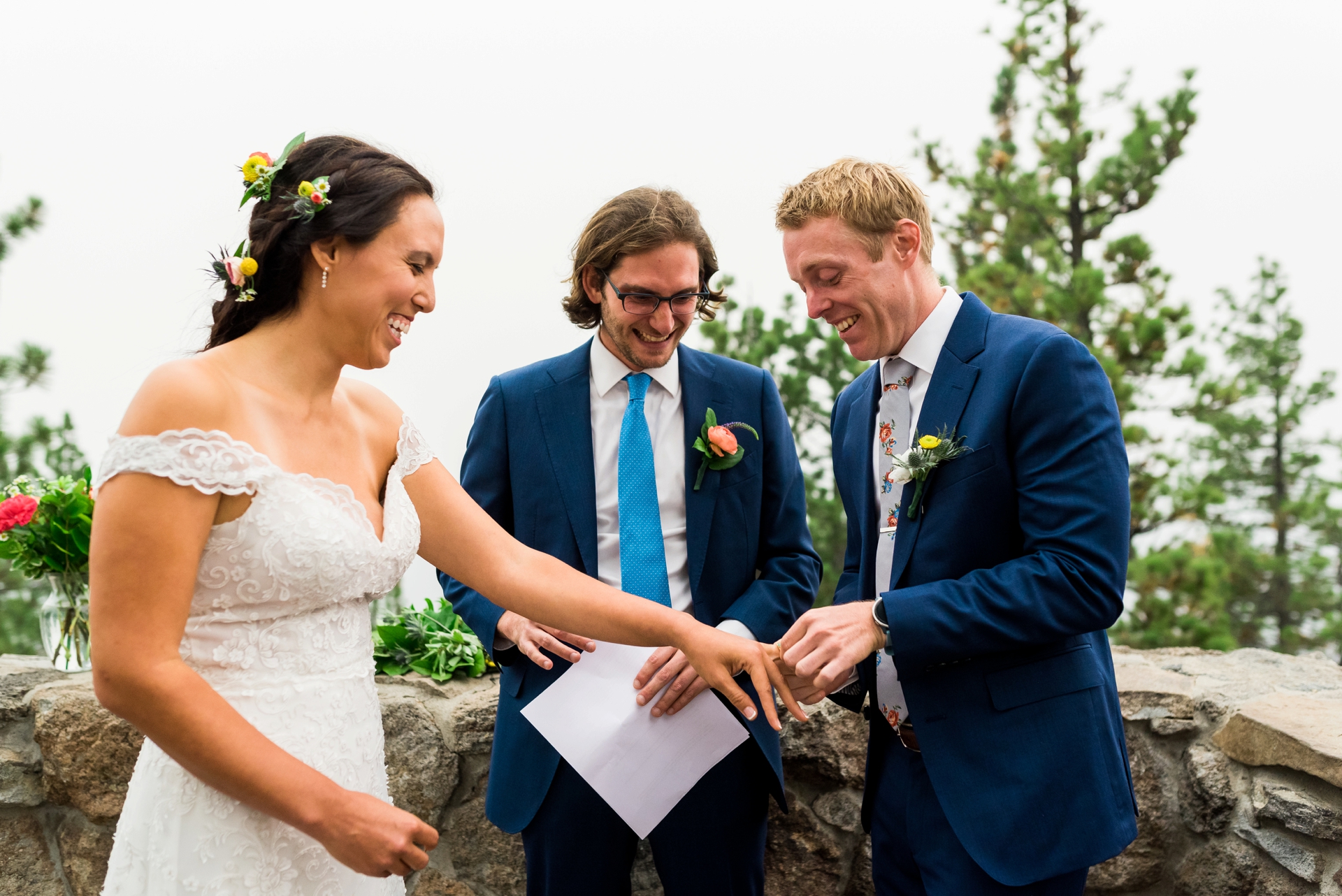 The bride and groom exchange rings during their private elopement at the top of an overlook at Lake Tahoe, NV. 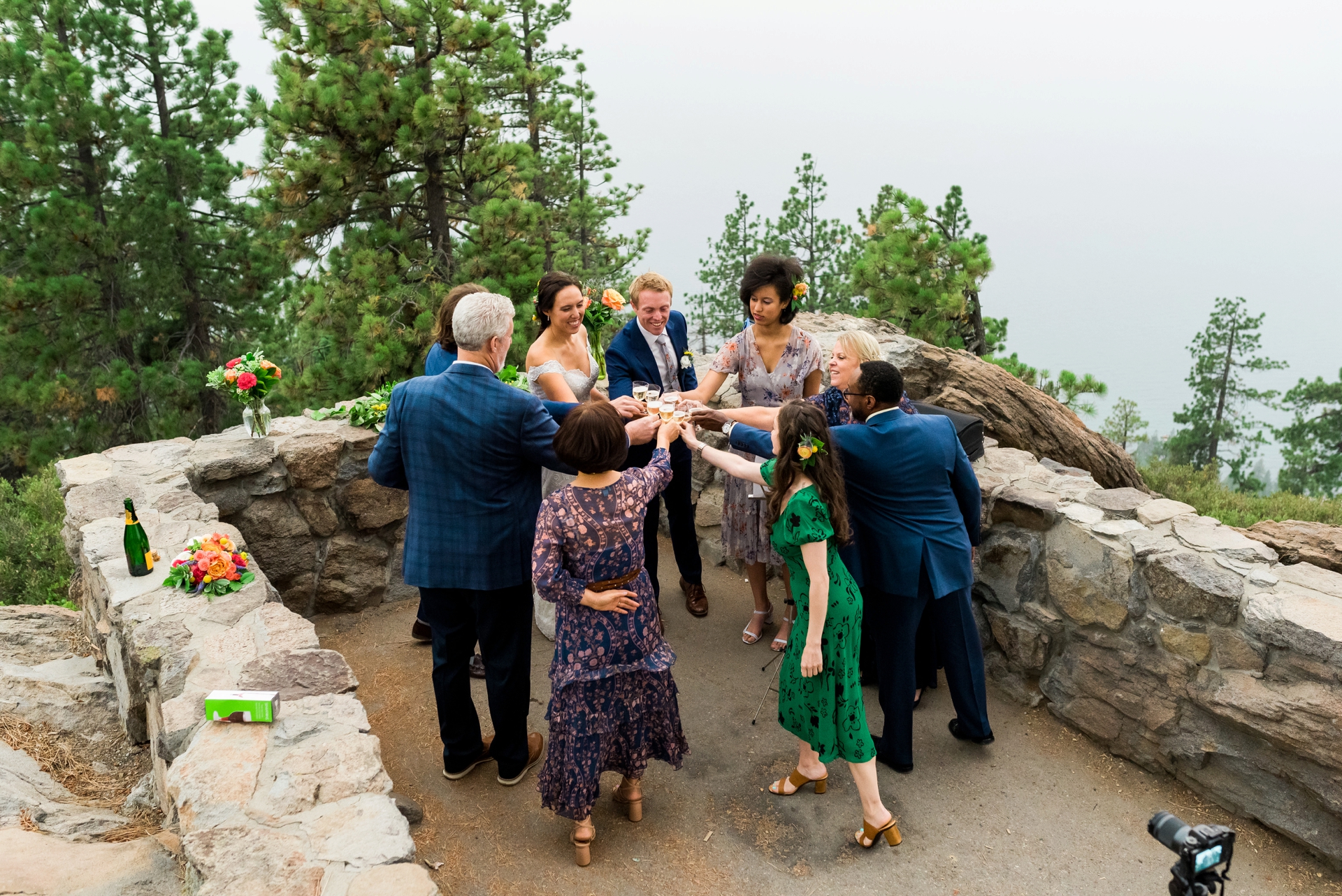 The family toasts to the couple and the ceremony. 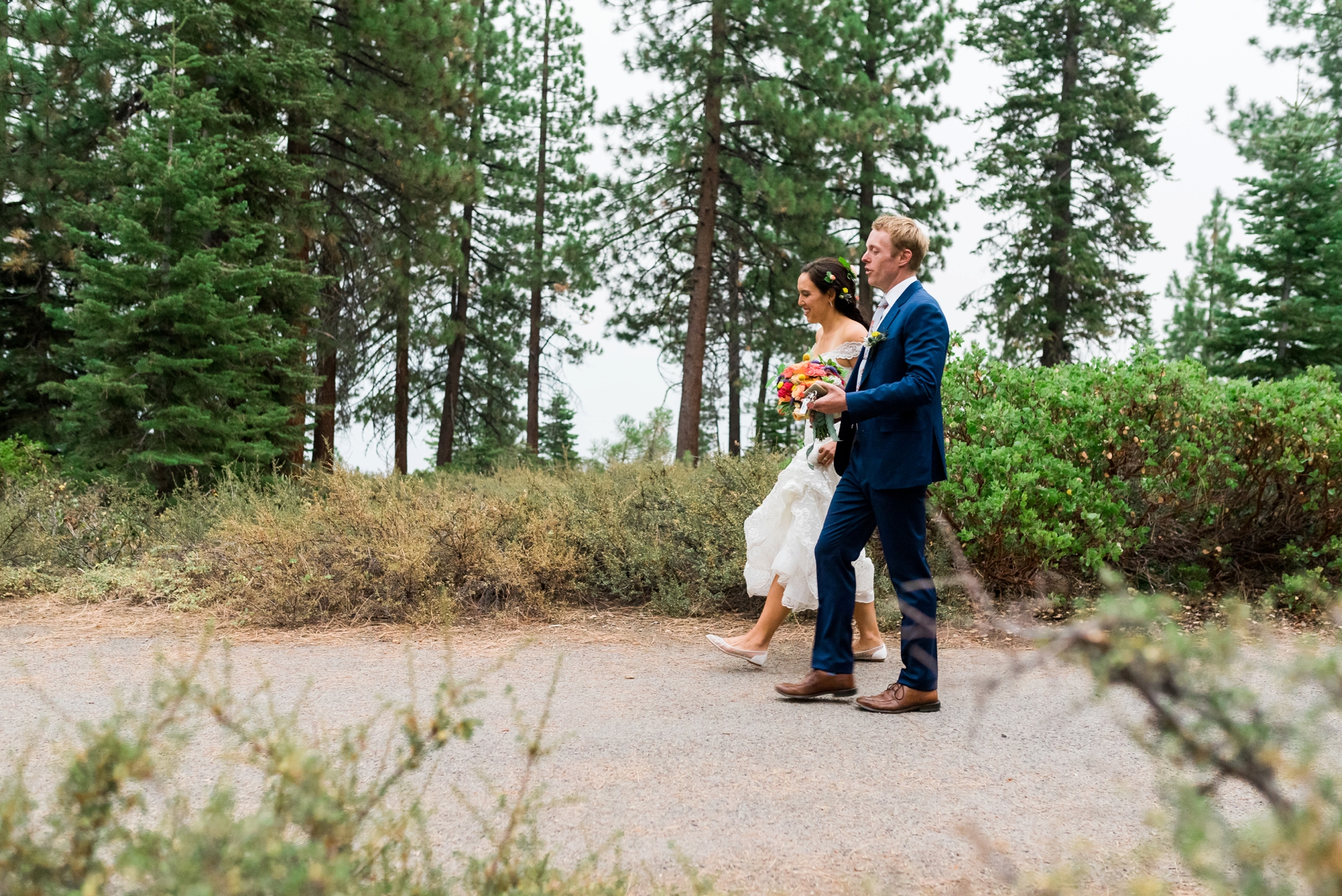 The couple hikes back down the mountainside after they are wed.