Are you looking for reasonably priced Teton Range elopement packages that will allow you to have your wedding recorded in a way that is both thorough and unique? Grand Teton National Park elopement photographer JD Land would love to hear from you if you are preparing to host a simple event that might be an adventure, destination, intimate, remote, or another type of non-traditional marriage celebration. The following small wedding took place in the Grand Teton National Park Service, above a scene rich with wildlife, lakes, and alpine terrain, but JD is available for smaller-scale weddings in or around all of Wyoming. For more information about having this WY professional moment-driven photographer easily document your elopement, contact JD Land without delay. 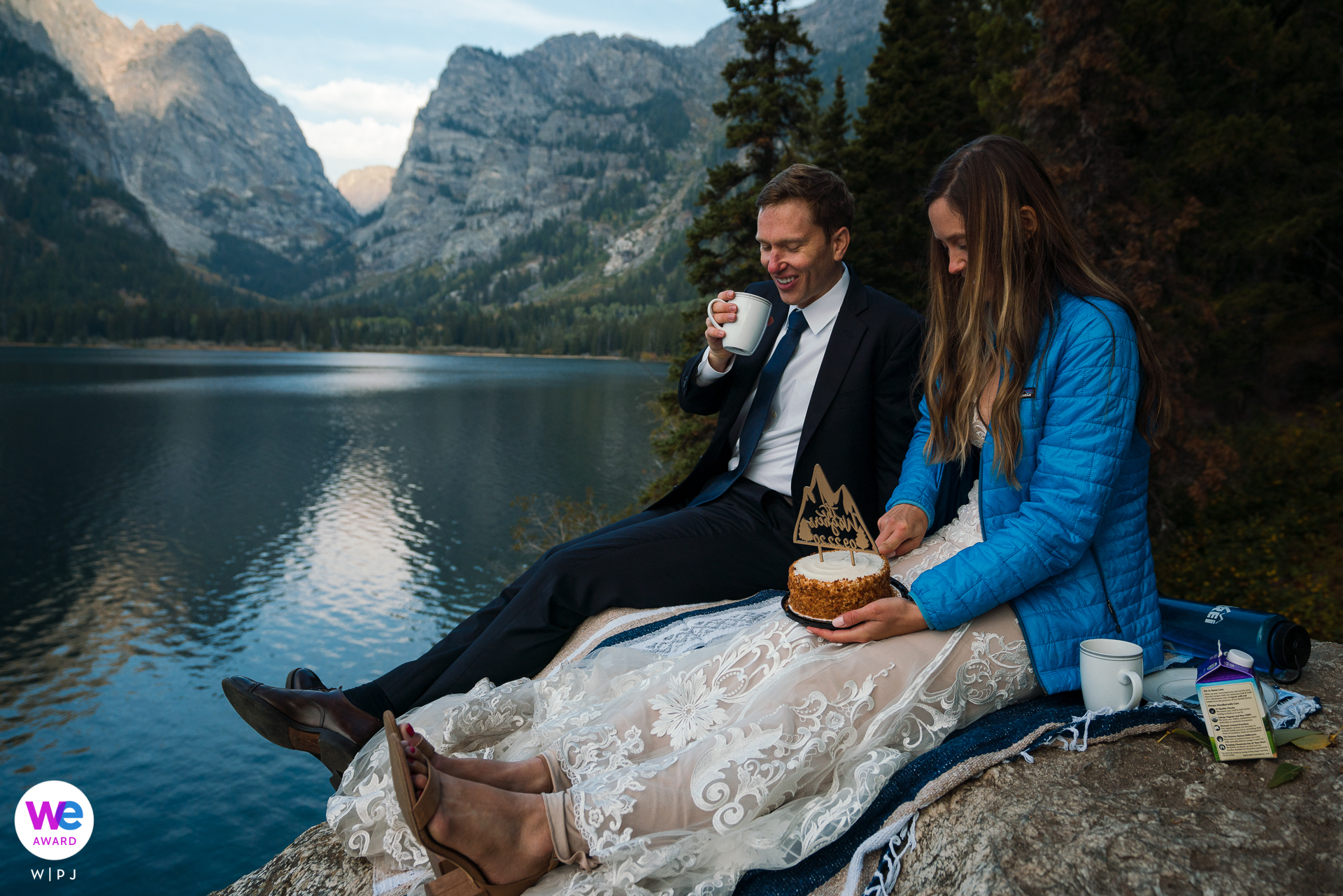 The couple setting up their picnic spot to have some well deserved coffee and some of their wedding cake for breakfast during their Grand Teton National Park elopement.

Nate and Tori had a pretty tough 2020.  With the virus outbreak, the couple had decided an elopement was the best option to get married in 2020. Being that they are very adventurous and love to hike, we had originally planned on a Yosemite National Park elopement.  Tori had secured a wilderness permit for us to hike in 5 miles and backcountry camp overlooking half dome, with a sunrise elopement set for the next morning.

As the date approached, the wildfires in California grew worse.  A little over a week before their date, the wildfires were rapidly encroaching on Yosemite and the park was already blanketed in smoke.  Being that it was 2020, Nate and Tori just rolled with the punches and we started talking about a new location.  It turns out that when they first started dating, they were on a road trip heading to Yellowstone when night fell and Nate wasn't feeling great, so they stopped at the first hotel they saw.  This hotel just happened to be less than a mile from the Grand Tetons National Park!  The next few days they took turns feeling under the weather but it's one of those experiences, early in a relationship, that shows you how you can rely on your partner. One of those unexpected adventures that ends up being the building blocks of a GREAT relationship!

So when the Grand Tetons was brought up as a possible new elopement location, Nate and Tori immediately felt like it would be perfect.  They had fond memories of the park even though they never had the opportunity to explore it because they were too busy taking care of each other.  What better way to build on the memory of that first foundation block then to finally explore the park together and get married there!  After a little research, we found the perfect hike, and off to the Tetons, we all went!  With a 7 am sunrise, we started our hike just after 5 am.  None of us had been on this hike before and when we arrived at the location it was still dark.  When the twilight started to illuminate the landscape just a little, we realized how perfect of a location this truly was!  As the sun rose above the horizon and the morning light kissed the mountains, we took the one portrait in this story before Nate and Tori did their self uniting marriage.

After their ceremony, before hiking back out, they made some coffee and spent some time taking in the location and the moment.  They even brought a cake along to share in some of the "wedding traditions".  For me it was a truly amazing moment to capture for this couple.  To see how happy and content they were.  To see how important this beautiful little spot in the world was becoming to them.  It just made me so happy for them after all the stress and frustration they had been through planning this day.  Tori summed it up in a comment she made as we were hiking out, she said, "This was just meant to be" with a big smile on her face. 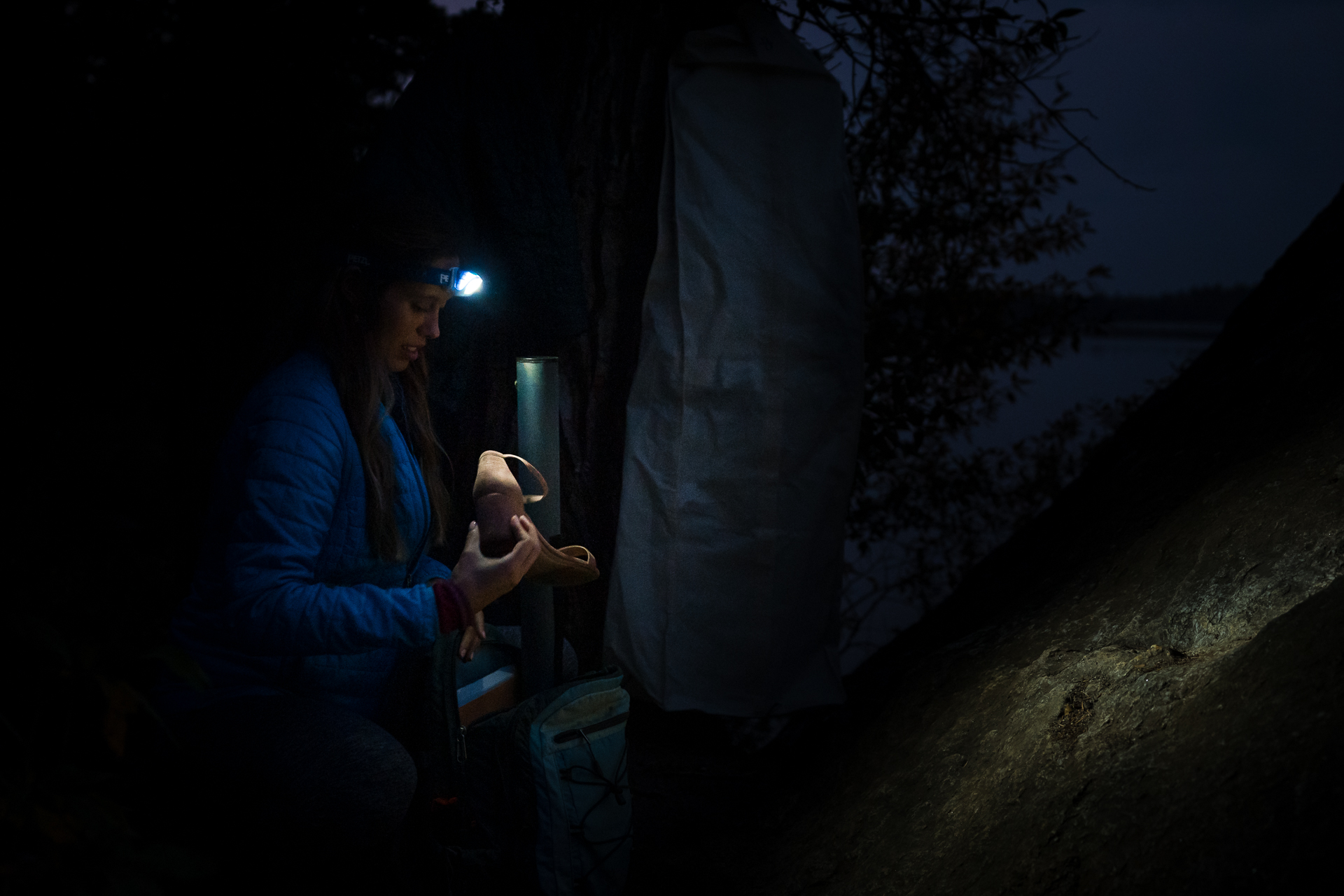 The bride starting to unpack her wedding dress, rings, and shoes, from her hiking pack. 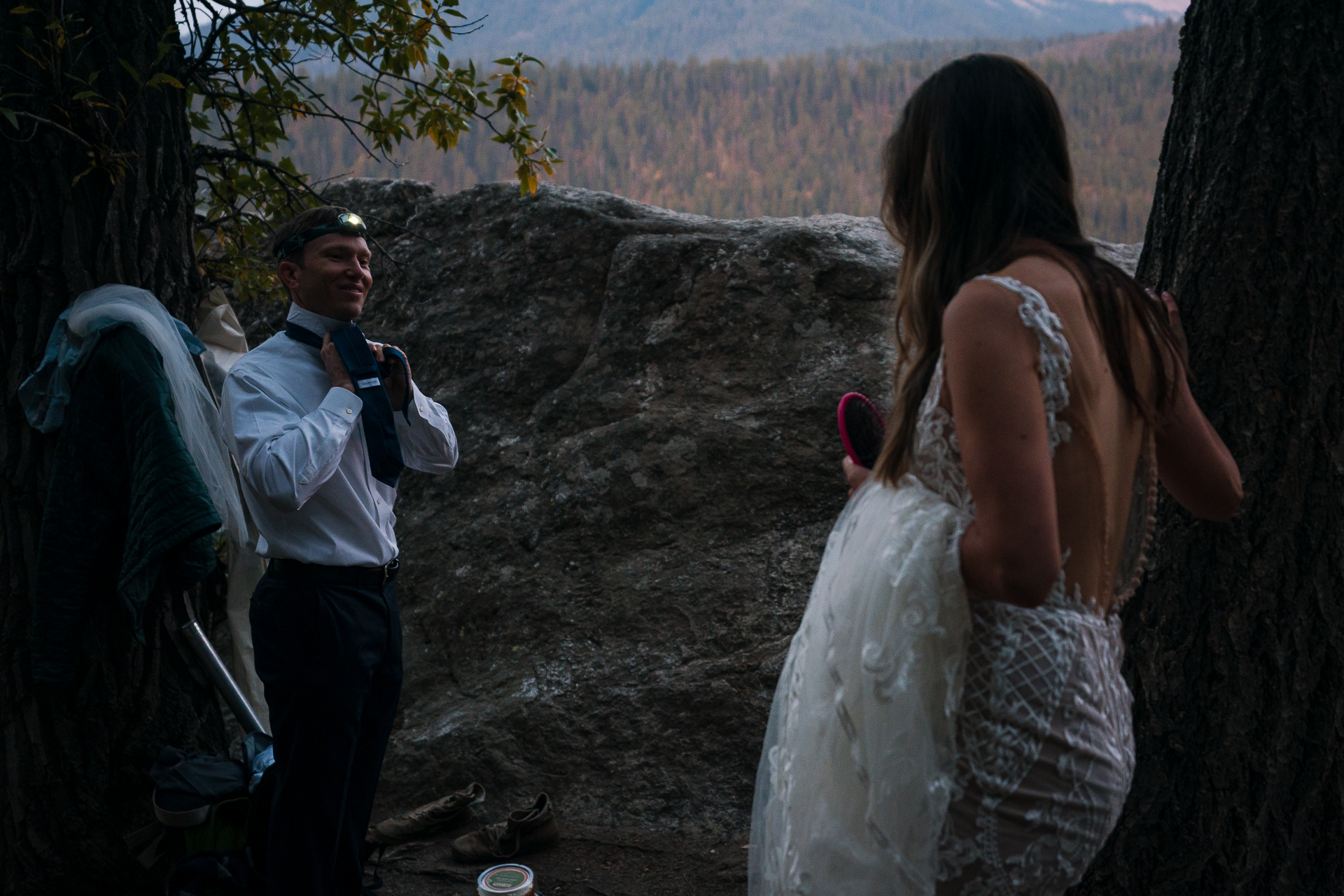 The bride coming back out of the woods after getting changed into her wedding dress. She is letting him know that he has to figure out how to button up the back of the dress.

Grand Teton National Park, Wyoming Sunrise portrait of the couple before the self-uniting ceremony at the lake 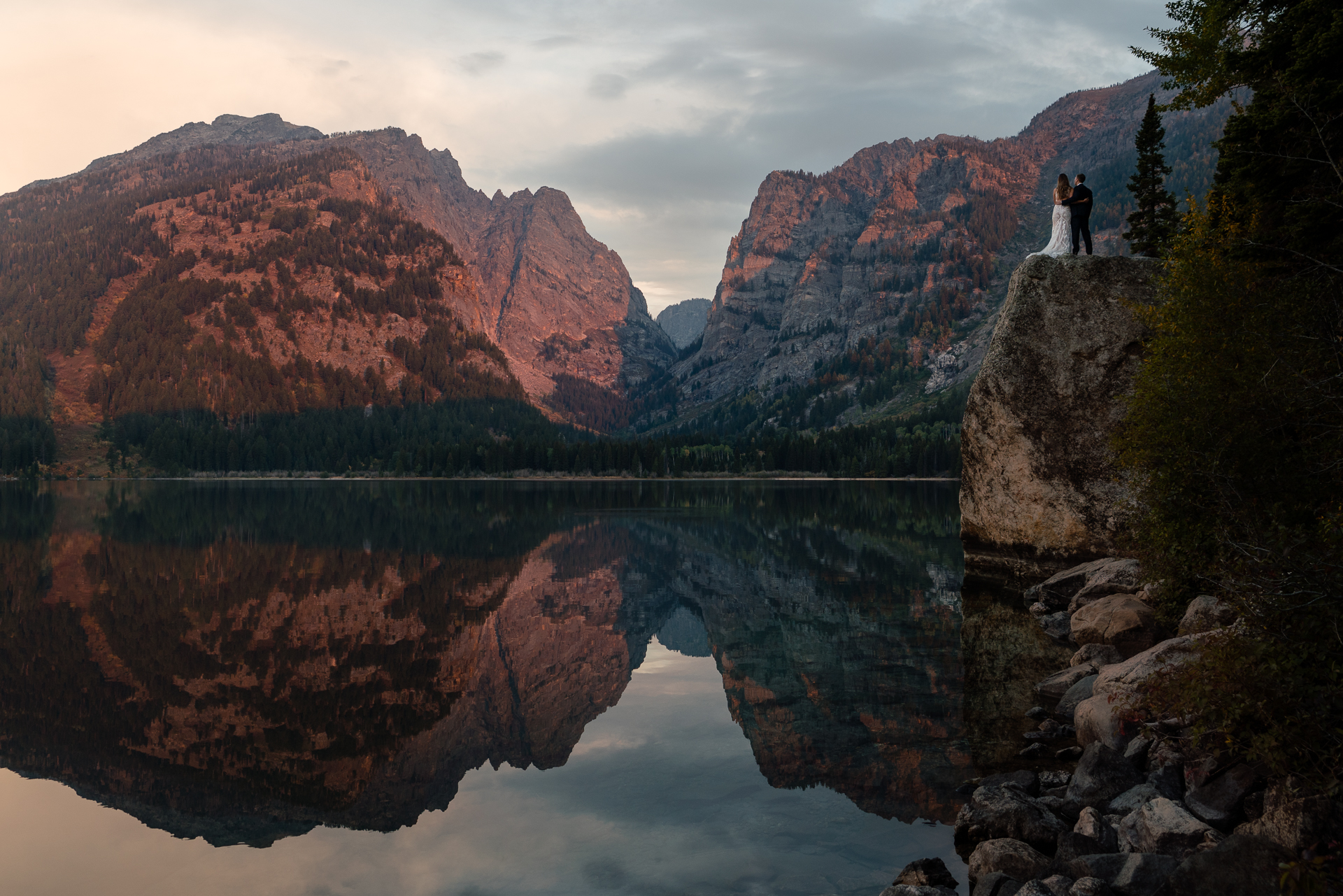 Sunrise portrait of the couple minutes before they started their self-uniting ceremony. The couple wiping away tears during their vows as they had their self-uniting elopement ceremony in Grand Teton National Park. 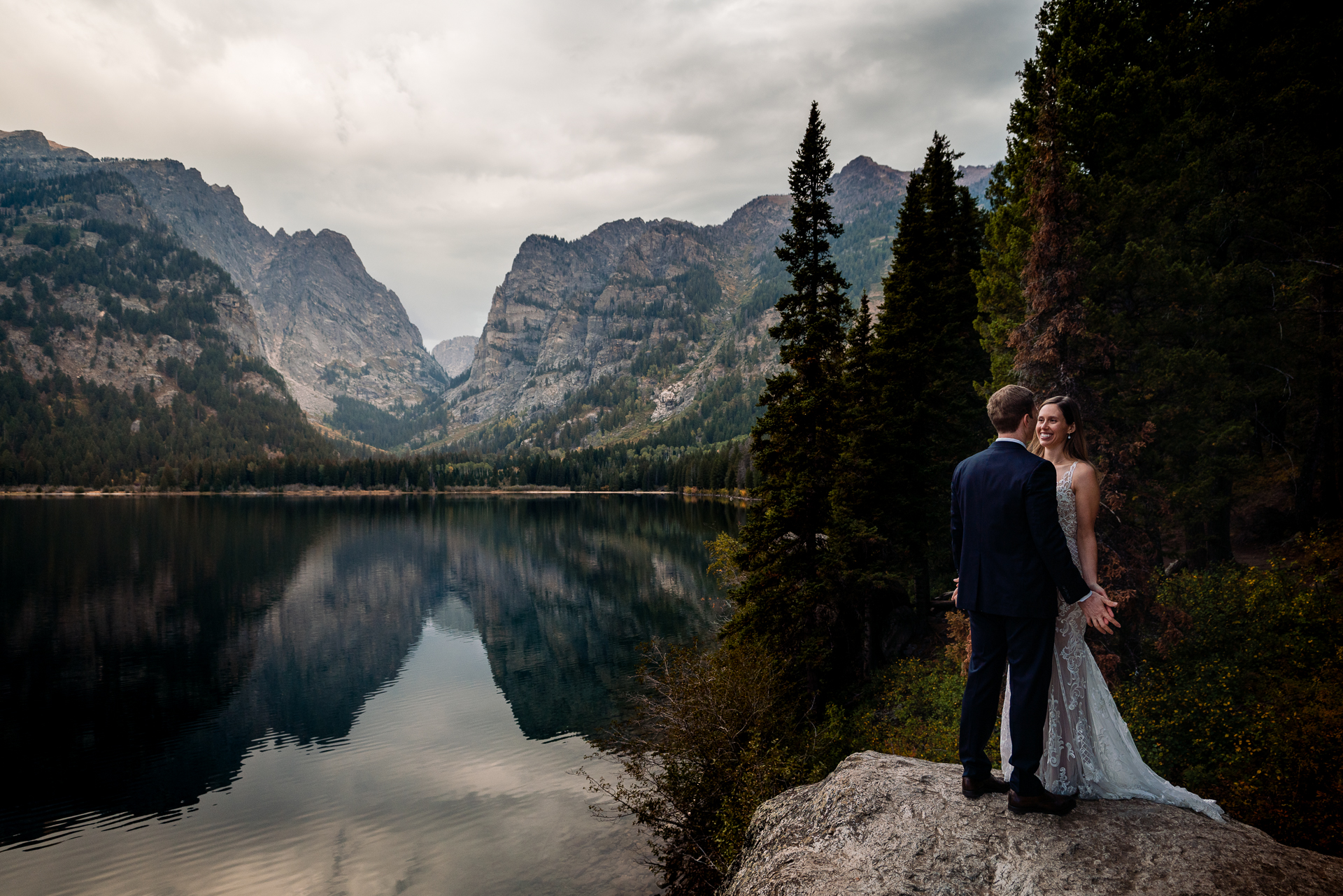 Moments after the couple finished their ceremony and had their first kiss following their self-uniting ceremony in Grand Teton National Park. They were all smiles and just so happy in this moment! 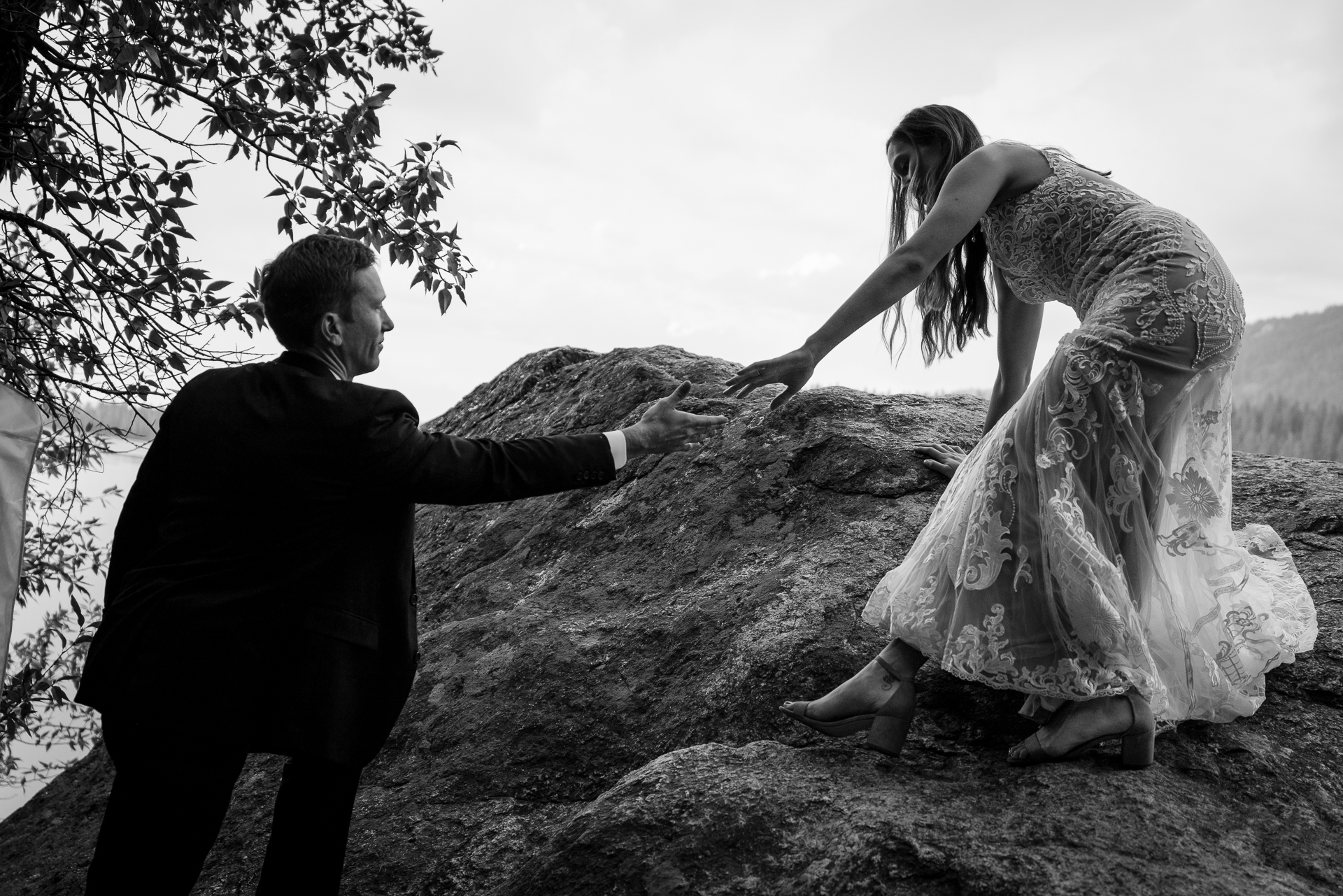 The groom helps his bride down from the rock they had chose to enjoy the views and have their elopement ceremony in Grand Teton National Park. 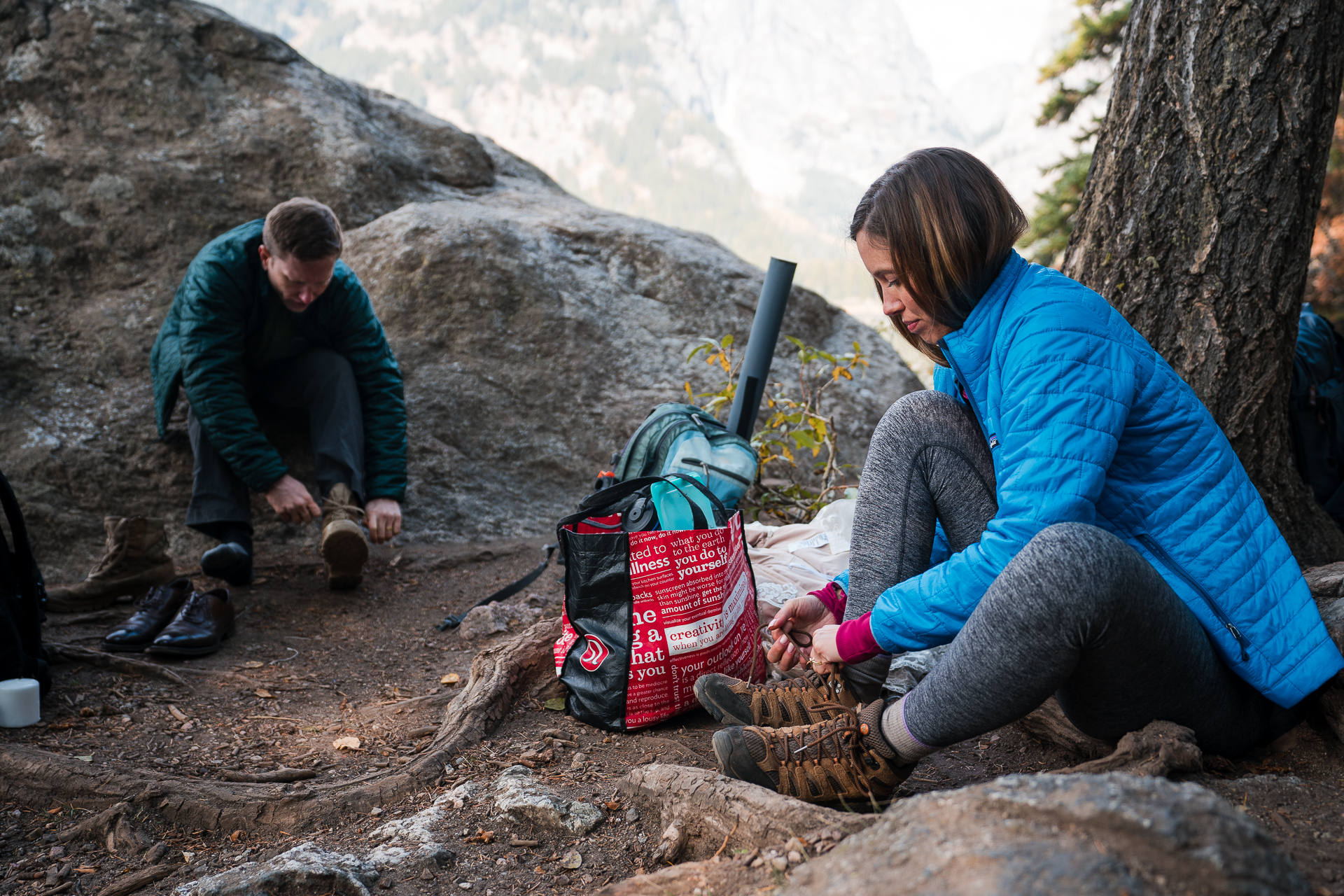 The couple changing out of their wedding attire to start hiking out after having a beautiful elopement in Grand Teton National Park. 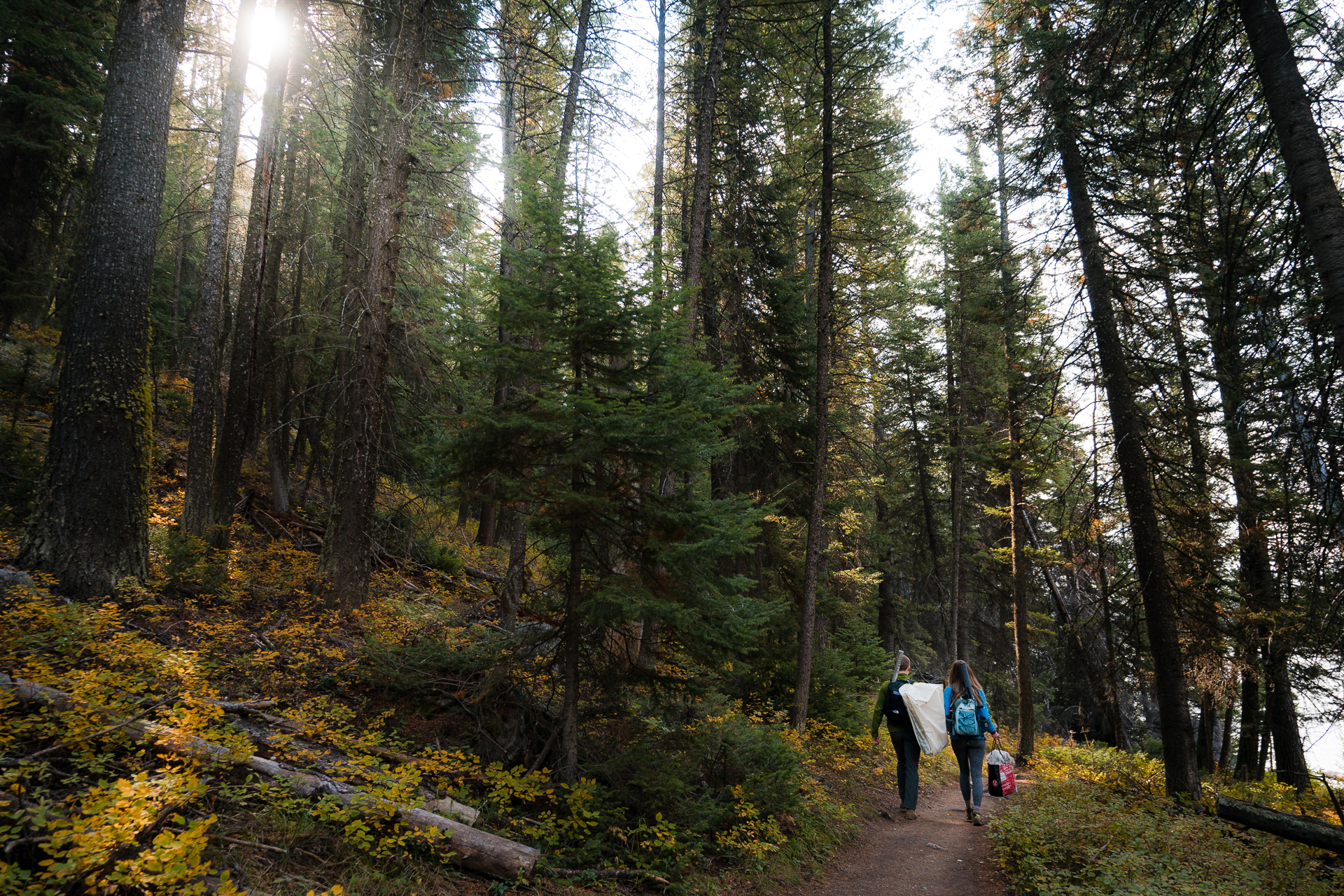 The couple starting their hike back out after completing their elopement wedding in Grand Teton National Park. Leaving a location they will be back to regularly to enjoy and remember the moment!