Are you looking for inexpensive Charlottesville elopement photography that will allow you to have your backyard wedding recorded in a way that is both thorough and genuine? Virginia elopement photographer Xiaoqi Li would love to hear from you if you are planning to host a simple occasion that might be a micro, backyard, countryside, informal, or another type of non-traditional wedding. The following small wedding took place in the county seat of Albemarle County, but Xiaoqi is available for smaller-scale weddings in or around all of Virginia. For more details about having this VA documentary-style photographer expertly document your elopement, contact Xiaoqi Li at your earliest convenience.

Wedding Couple Portrait in Charlottesville, VA at Sunset of the bride and groom 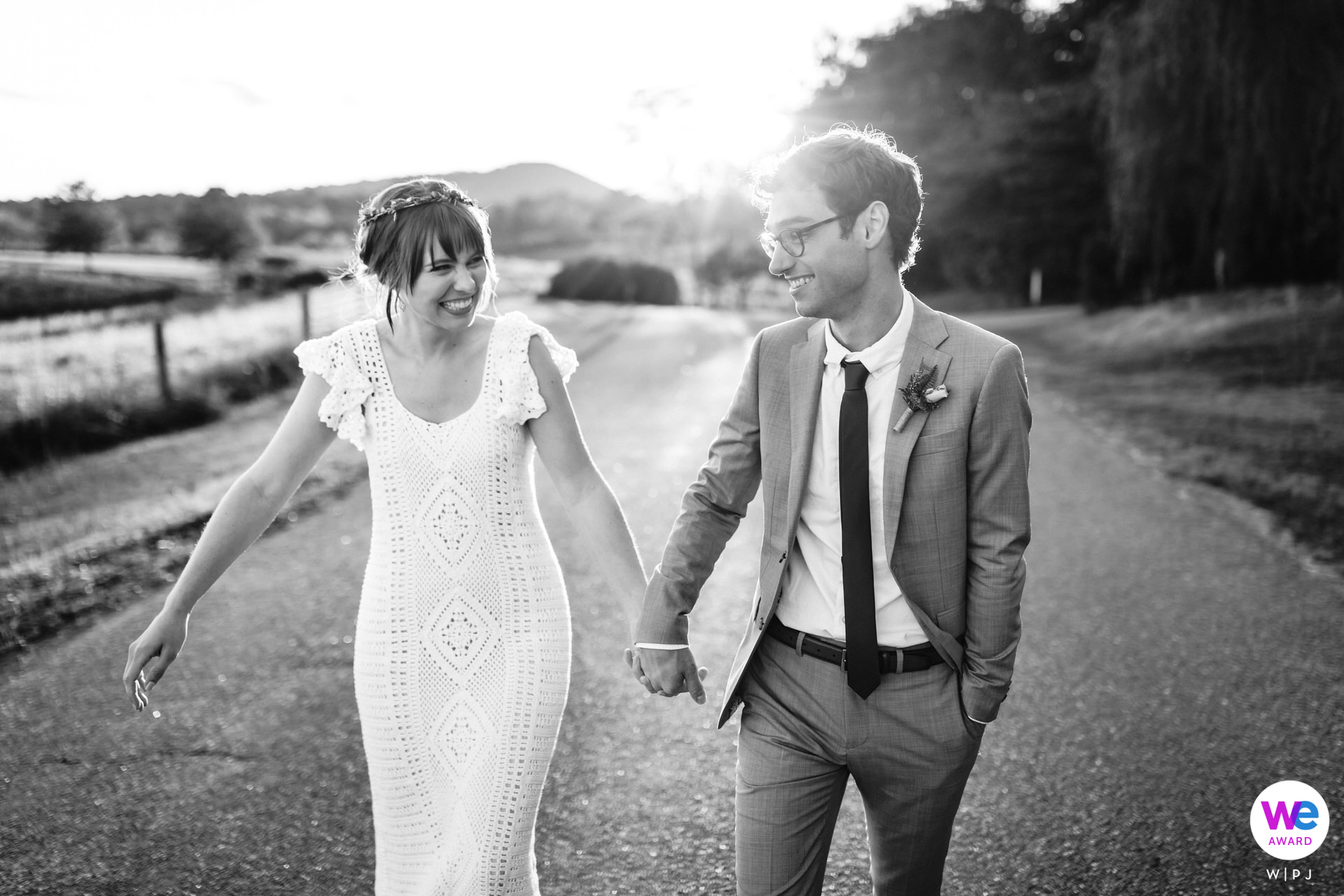 Sunset portrait of the bride and groom walking together.

When looking for mountain views, sometimes all you have to do is ask Grandma! When Jenny and Nick realized they needed to postpone their big wedding, they decided they still wanted to make it official on their original date and venue. But once they realized how much travel that would entail, they then discovered Jenny’s grandparent's home was far more convenient and just as beautiful. So they pivoted to a fall backyard wedding just north of Charlottesville, Virginia.

In addition to planning an entirely different wedding, Jenny also decided to take on another project for herself – she was going to make her own wedding gown. I was so impressed upon learning she crocheted the entire gown herself! Her friends were just as surprised as impressed during their first look with Jenny. I remember hearing a bridesmaid exclaim how much she loved the sleeves because she didn’t know there were going to be sleeves. Jenny replied that she didn’t know either haha – she just got those sewed on during the car ride up from Georgia!

Although Jenny and Nick weren’t planning for a first look, they had to see each other at some point before heading over to easier transportation logistics. So we opted for a very impromptu but nonetheless joyful first look. They gave each other the biggest hugs and beamed with excitement for what was to come next at their fall backyard wedding.

Although these two have been referred to as an old married couple having been together for over 12 years, it was still a joyous day for friends and family alike. Their backyard wedding was absolutely breathtaking. Their styling included elegant bohemian-inspired touches, from the colorful floral invitations to the floral crown worn by Jenny. Between all the personal touches, the amazing weather that day, and having the support of those most important to them - it was still a perfect wedding day.

BW Wedding image from Charlottesville, VA of bride putting on the finishing touches with her mom 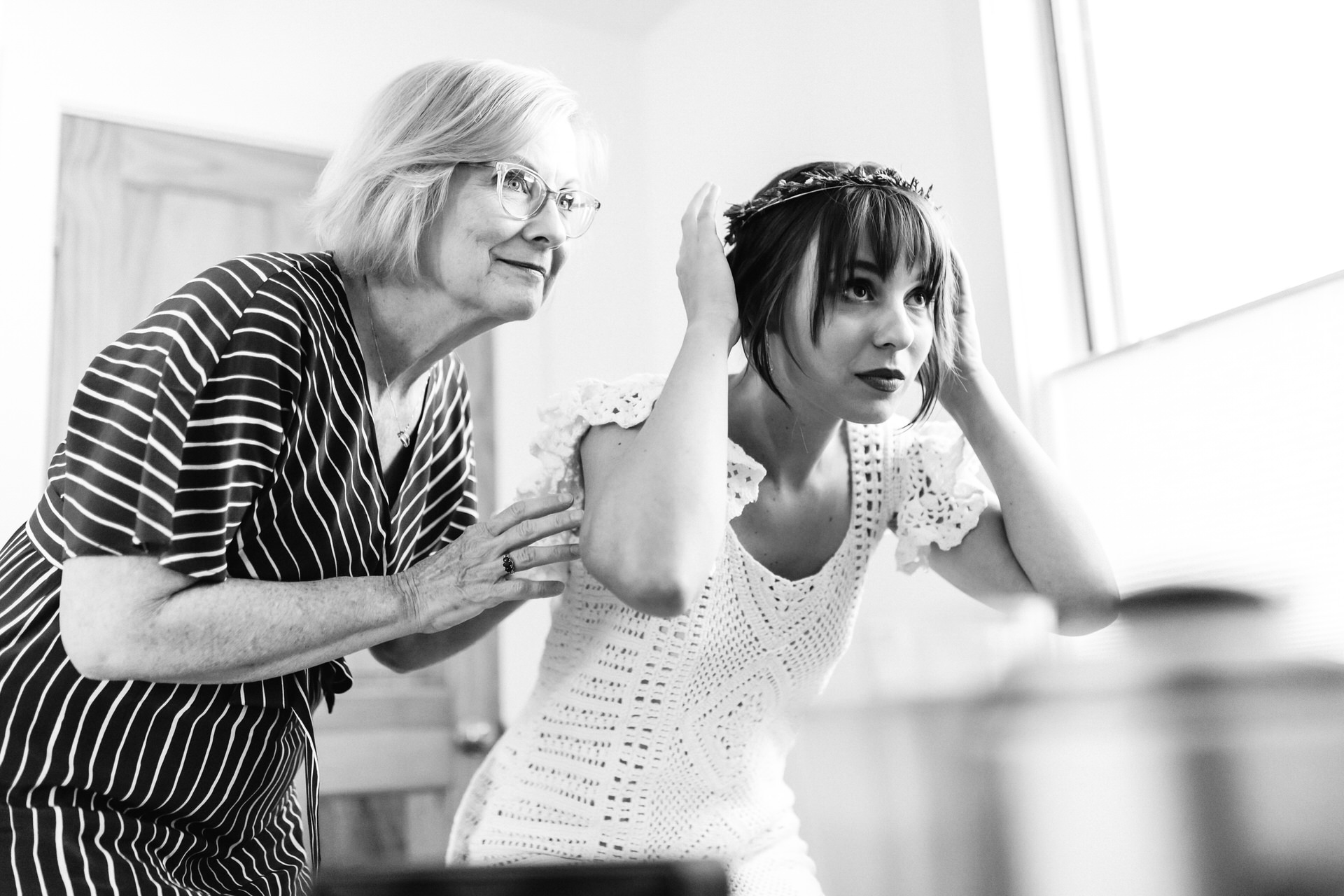 Mom and Jenny putting the finishing touches to getting ready. 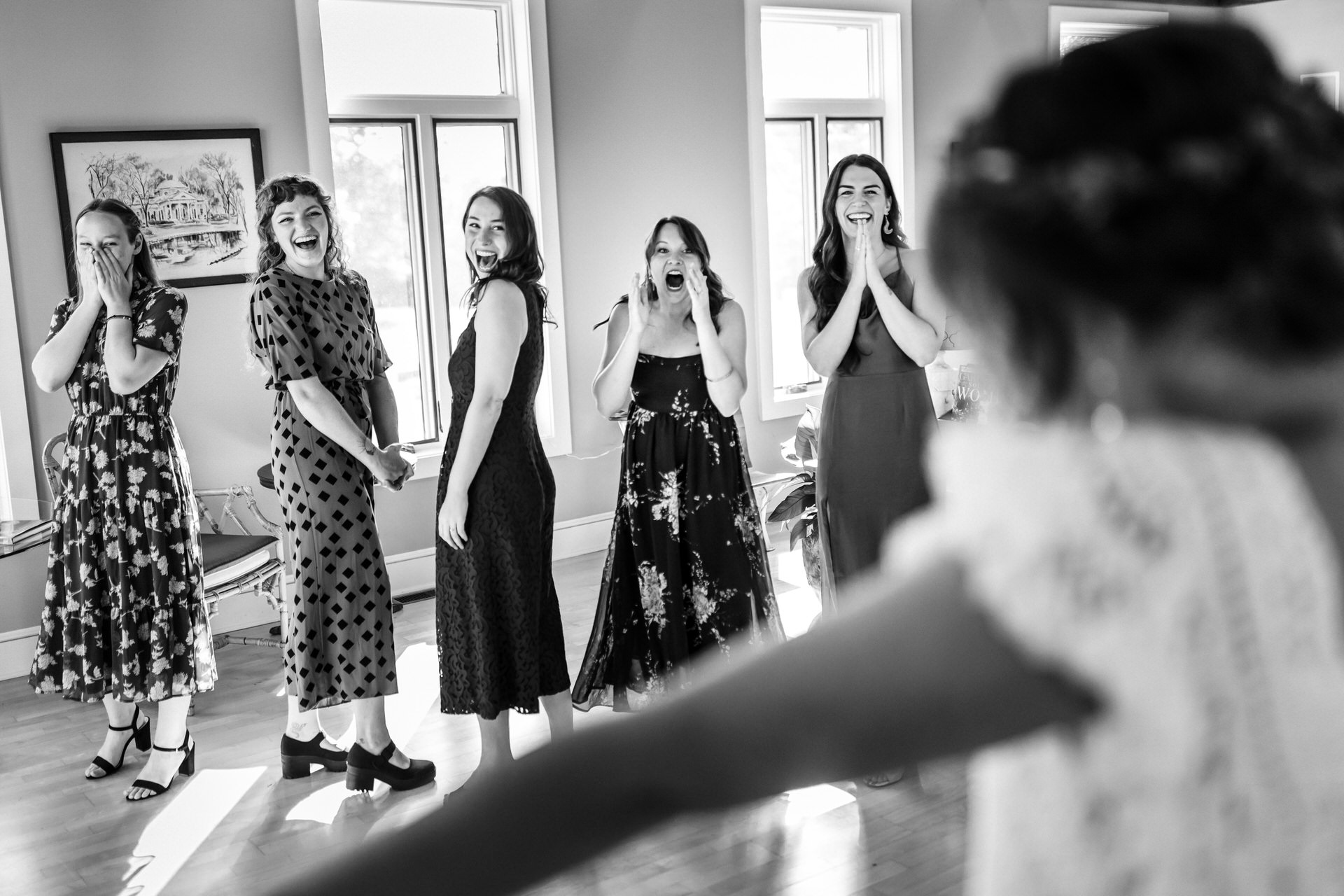 Jenny surprised her bridesmaids with an early peek at her hand-crocheted dress.

Backyard, Charlottesville Wedding Photo of an impromptu first look for the bride and groom 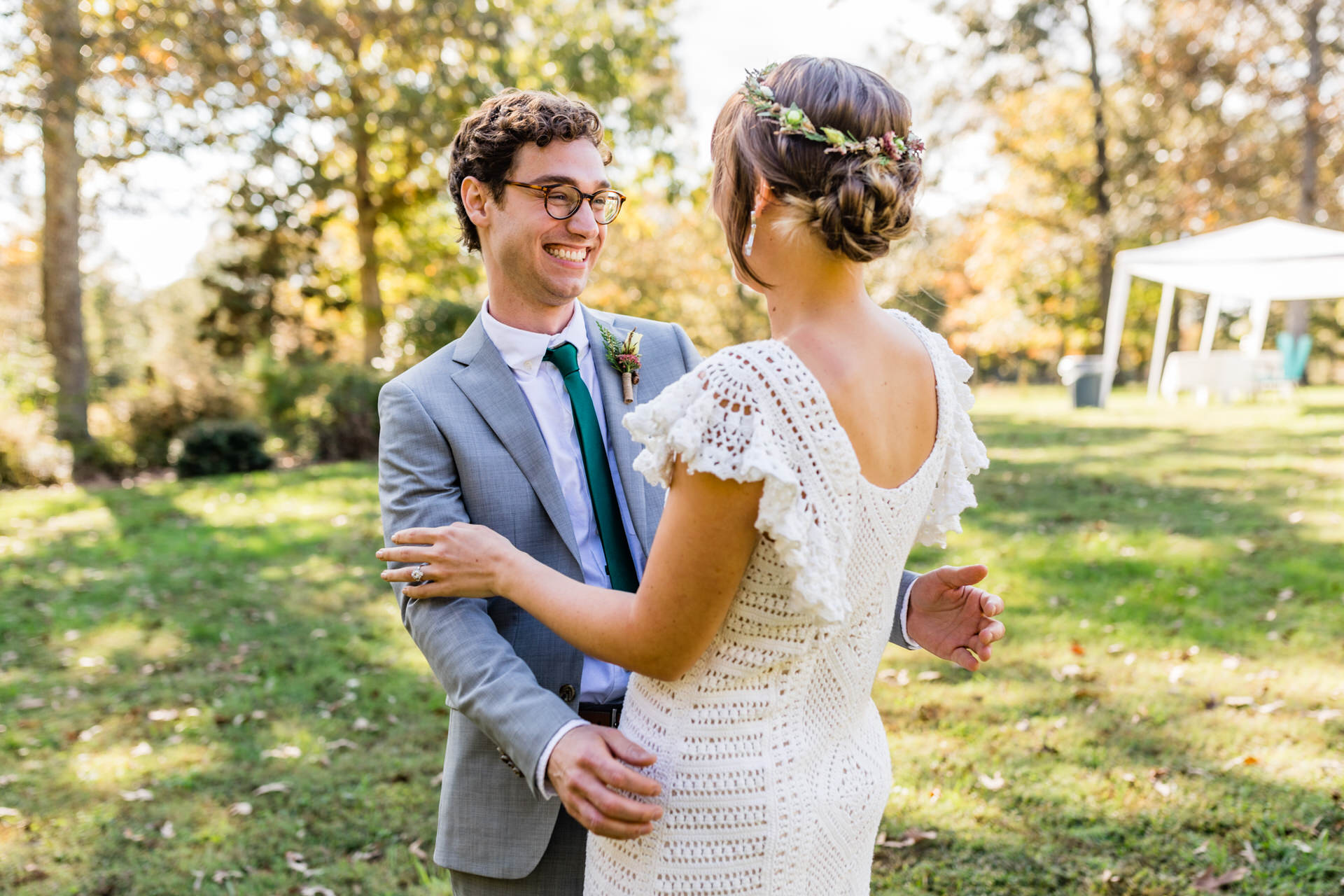 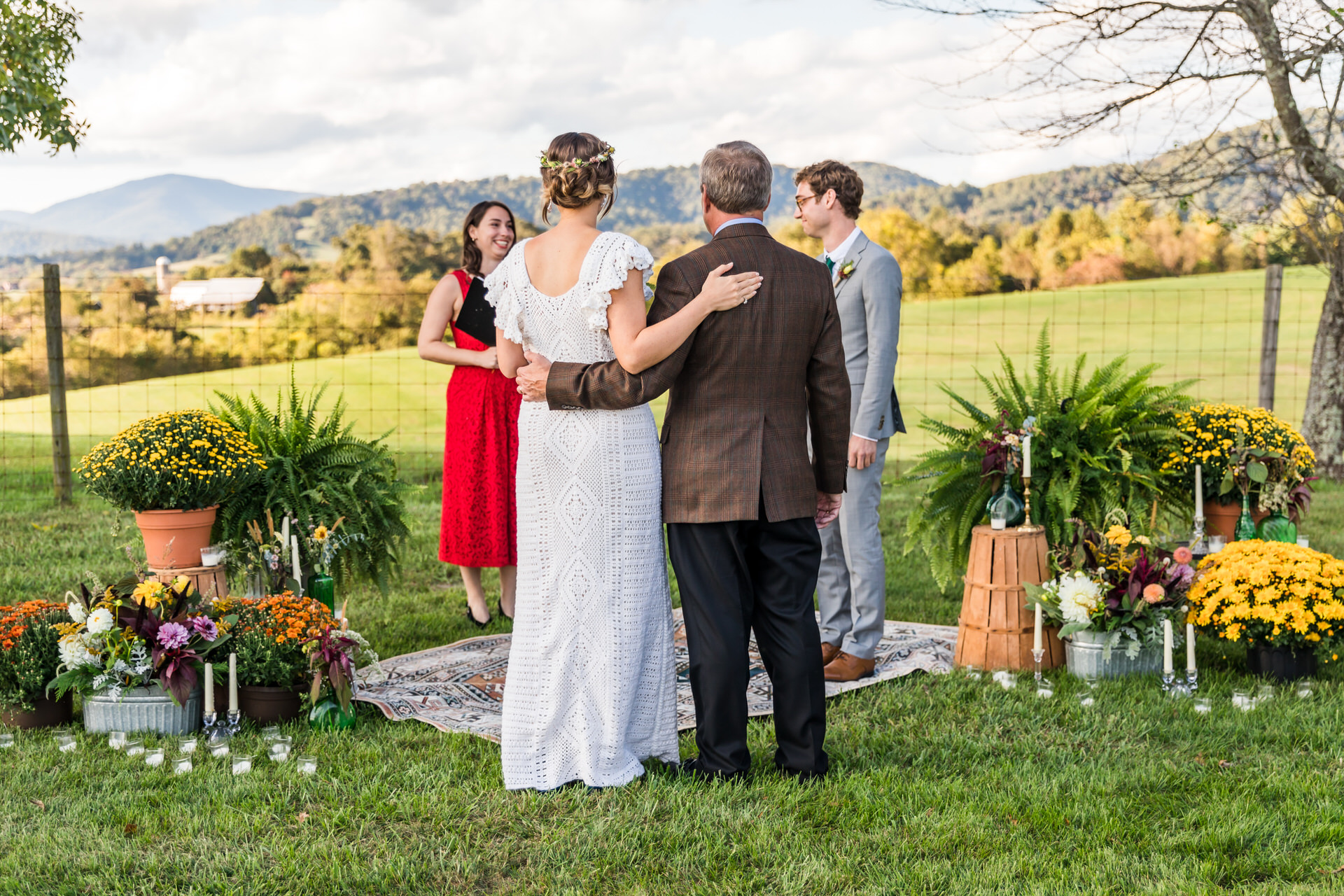 Jenny and Dad walking up the aisle to Nick. His sister, Ari, officiated the wedding.

Photography from a Charlottesville Virginia Wedding as They kept the ceremony very casual, with guests sitting in lawn chairs 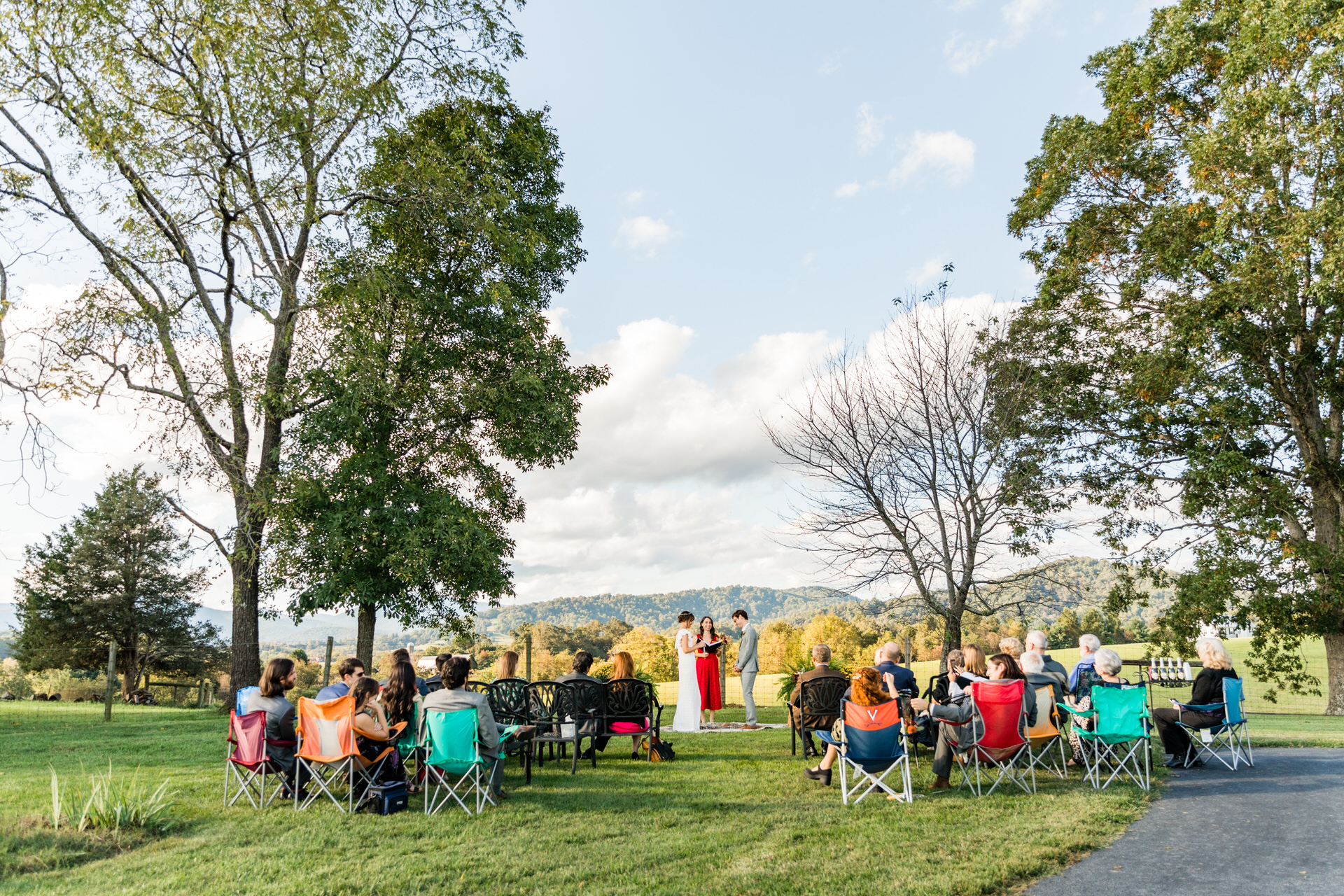 They kept the ceremony very casual, with guests sitting in lawn chairs. The location is the side yard of Jenny's grandparent's home. 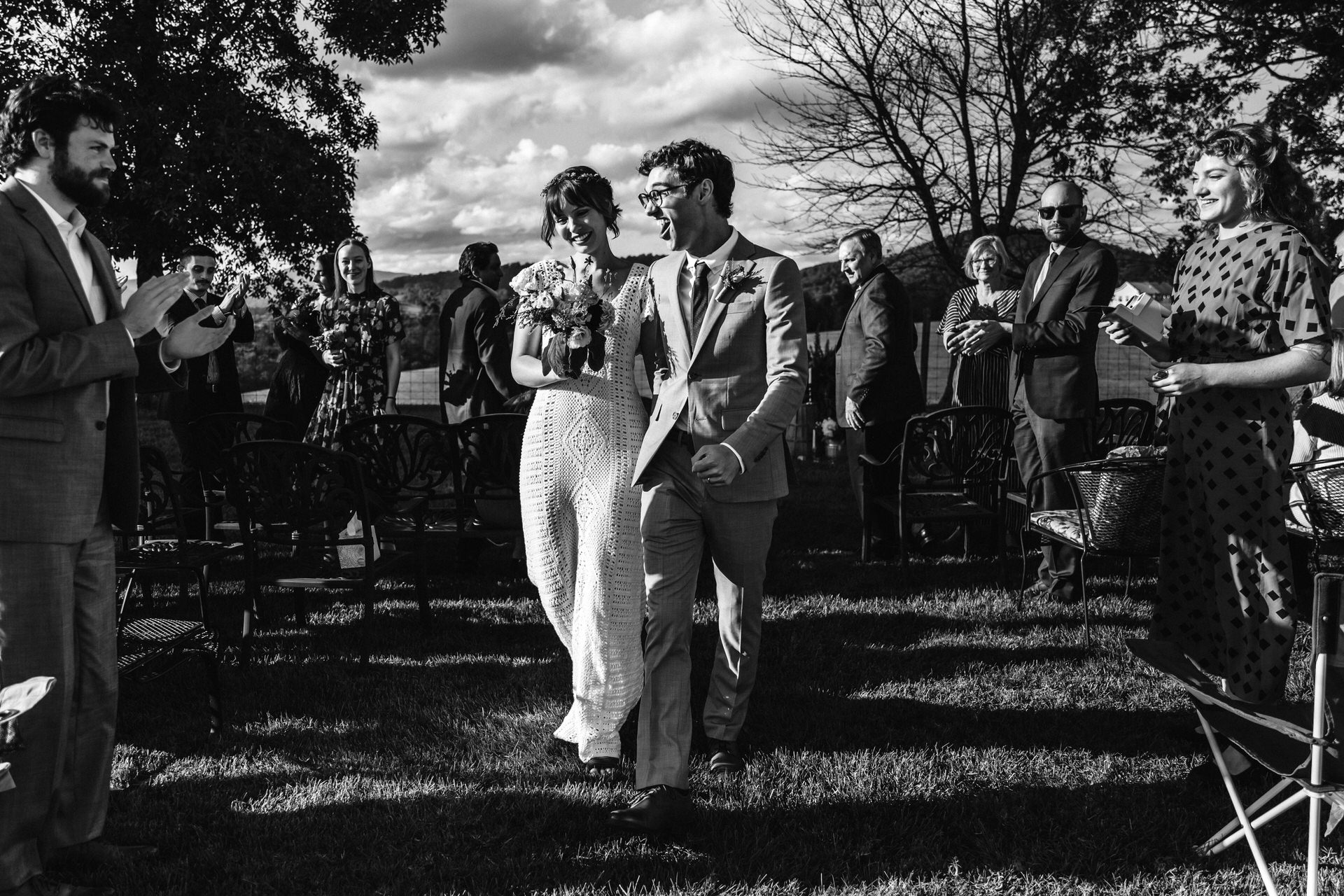 Jenny and Nick processing after the ceremony. You can feel Nick's energy and excitement!

Wedding and Event Photo from Charlottesville, VA of The groom lovingly mocking the way the bride is showing off her ring 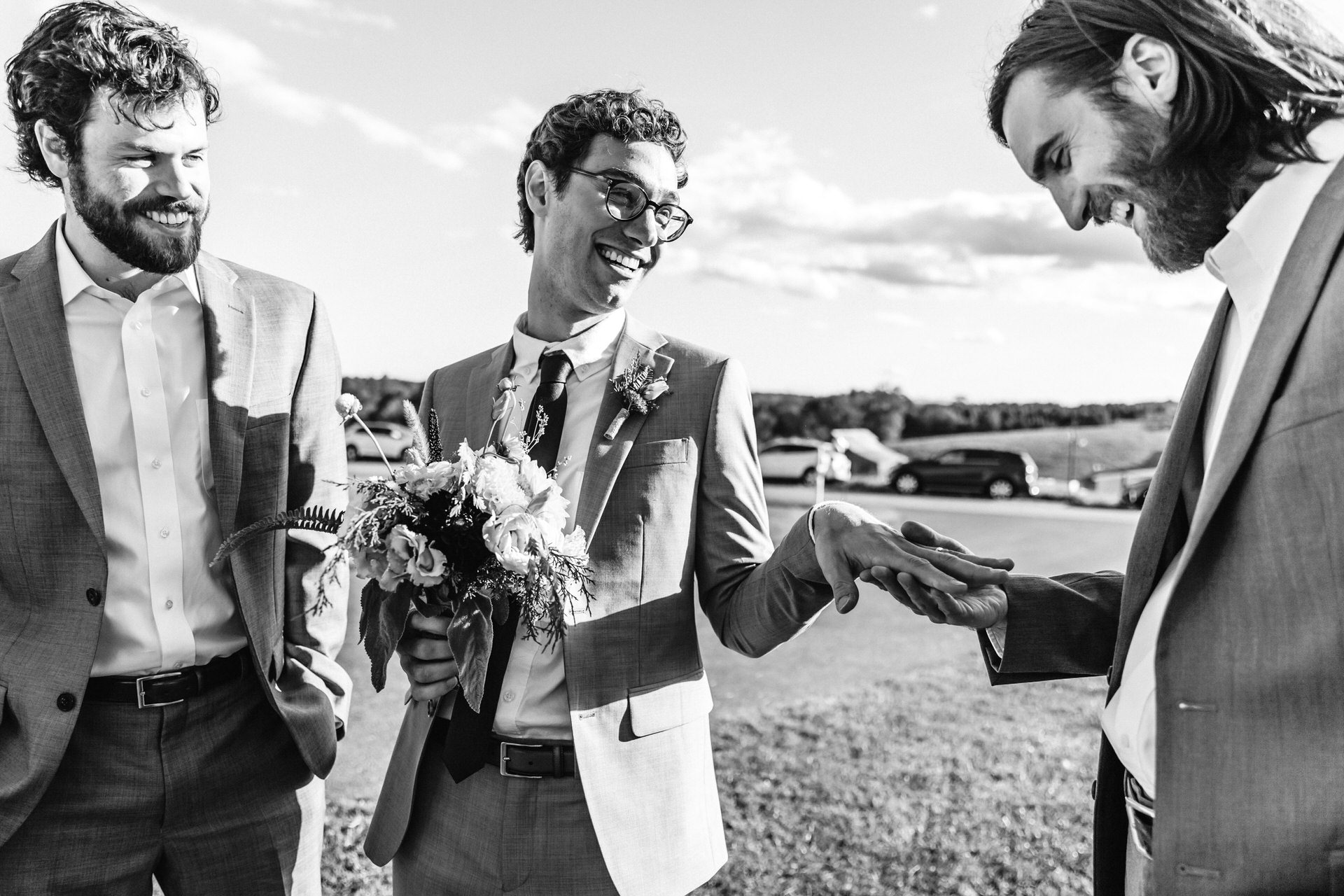 Nick lovingly mocking the way Jenny is showing off her ring, 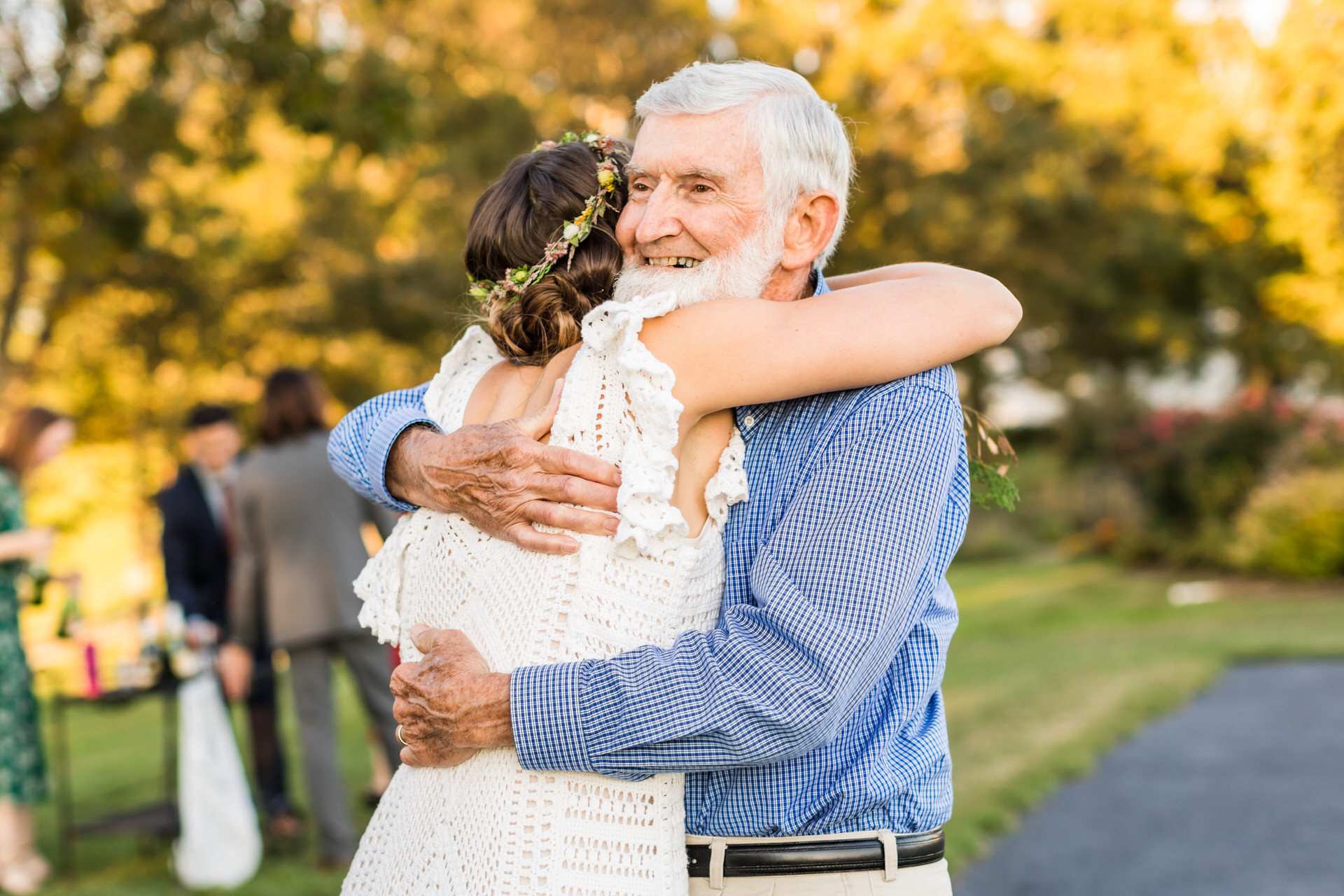