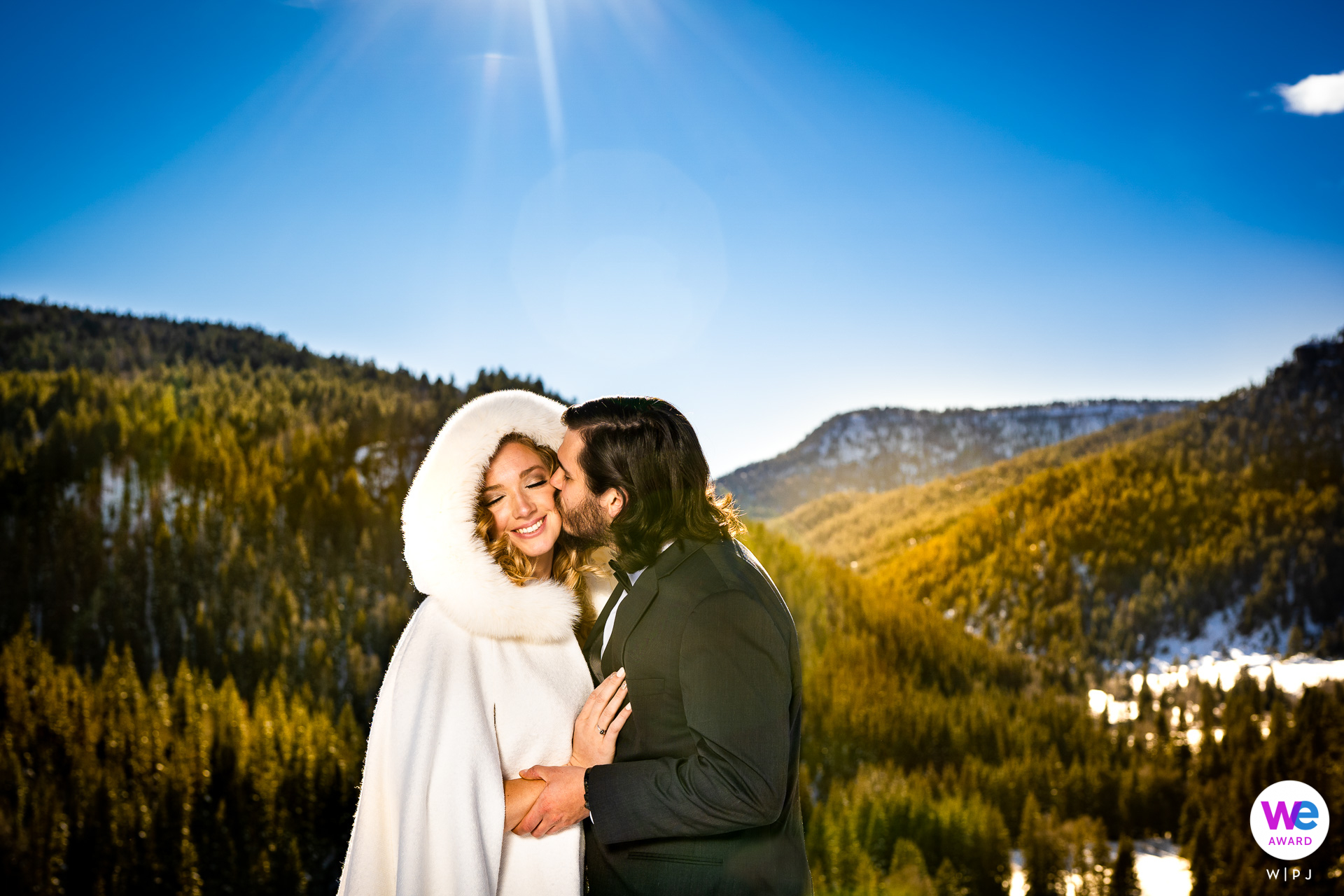 Dani and Josh traveled from Indiana to Colorado so they could celebrate their February elopement in the winter wonderland that is the majestic San Juan mountain range. They were able to gather their close friends and family from around the country to kick off their epic elopement weekend just down the road from the town of Pagosa Springs, which is home to famed mineral hot spring pools.

Dani had never before been to Colorado, but Josh had assured her the mountain views were worth the trip. Josh’s sister Jillian works at the Snow Wolf Lodge, which hosted the party for the weekend and they had a chance to explore the area the day before by snowshoeing and relaxing at The Springs Resort and Spa.

They began prepping for the day in two separate cabins at this rural four-season retreat. After her mother helped her into her gown, they set off toward the Piedra Canyon for their first look. Except, this was no ordinary first look. Dani had decided she’d like to play a trick on Josh by substituting his brother in her place. It was quite a shock when Josh turned around to see Jacob instead of his bride, but it sure did make for a good laugh. Afterward, we brought Dani out for take-two, and he exclaimed how happy he was to finally see her. We took a few pictures at the canyon overlook before heading to the ceremony.

When we arrived at Williams Creek Reservoir, everyone took a few minutes to put on their snowshoes. Have we mentioned how much snow there was?! You couldn’t walk anywhere without snowshoes, which we know because we tried and sunk waist-deep in several feet of snow. Dani and Josh’s ceremony went off without a hitch as guests trekked through the snow closer to the edge of the frozen reservoir. The sun was slipping away quickly and the golden light shone brightly on their small group. They huddled together for a family prayer, which brought many to tears. It was an intimate ceremony, during which no one held back the emotion of the moment, not their parents, not the wedding party nor Josh whose voice broke as he repeated his vows aloud. Dani quickly embraced him and they held each other close as they wrapped up the ceremony. Afterward, we took a few portraits as the sun cast its last light on the mountains, and then we took off to the lodge for the reception.

Dani and Josh were lucky to have a fun-loving, tight-knit group who absolutely adored them and took turns recounting stories and toasting their best wishes to the newlyweds as they capped off one beautiful day.