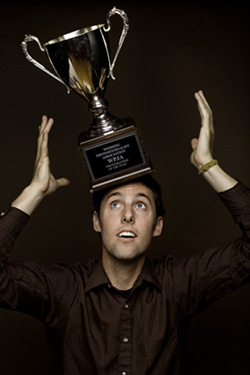 The WPJA is proud to honor Ben Chrisman, of South Carolina, as its 2007 Photographer of the Year.

Growing up, Ben was surrounded by creativity, his mother immensely artistic and his aunt a wedding photographer. He knew from an early age that he, too, wanted to pursue a career in the visual arts. So, when the opportunity presented itself to work as high school yearbook photographer, he grabbed it.

Continuing his momentum after high school graduation, Ben attended New Mexico State University and earned his degree in photojournalism. His work has been featured in some of the nation’s top news publications including The New York Times, Los Angeles Times, Washington Post and USA Today. His coverage of the tsunami in Southeast Asia was also featured in a solo exhibit at Unit D Gallery in Santa Fe.

After his transition into wedding photojournalism, Chrisman was recognized by American Photo magazine as one of the top 10 wedding photographers in the world. He finds himself most attracted to documentary photography as opposed to traditional newspaper photojournalism, which can strip one’s own creative freedom away to ensure the editor’s vision is met. “Newspaper photographers are forced to shoot within the confines of what an editor is looking for, and it is hard to be inspired when you can’t find your own unique vision,” Ben explains. “That is one of the biggest perks of being a wedding photographer. We can generally shoot however we want.” In this respect, he adds his signature style to each wedding story.

Ben’s approach is greatly influenced by well-known photojournalists like James Nachtwey and Joachim Ladefoged, each of whom uses photography as a narrative art form with a strong emphasis on shadows and dramatic lighting. While Nachwey and Ladefoged capture a completely different subject matter, Ben admires their innovative use of compositions, angles and reflections and, thus, seeks similar situations during weddings – from the whimsical smirk on the groom's face to the spectacular shadows cast by a candle-lit altar. 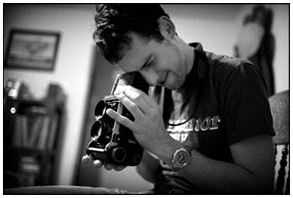 His favorite clients are those who love and appreciate photography. With a client base primarily composed of word-of-mouth referrals, couples hire Ben to achieve something different. That, he feels, is both a blessing and a curse. “A blessing because it gives me a lot of freedom with how I shoot, and a curse because I feel a lot of pressure to pull off what they expect of me every weekend. Each wedding is a very intense experience for me.”

During the event, Ben makes a conscious decision to take risks and approach each new scene differently. “It doesn’t always come naturally to me. I have to work at it, always,” he explains. Ben strives to build a visual narrative of the day without coordinating or directing events. Thus, while bad weather or late guest arrival might not seem ideal to the wedding couple, Ben uses these elements to add interesting layers to their photographs.

How does one capture a great wedding image? “To me, it’s very similar to music. If a song is good, you can recognize that no matter what style it is, be it rock or country or classical. For a photograph to appeal to me, it has to instantly grab me emotionally.” Ben aims to get a few frames at each event that cause someone to pause and wonder: ‘How did he get that?’

In the end, Ben provides an artistic narrative of the important day, giving each wedding the care and attention it deserves. “I click so well with my clients that they don’t feel like clients anymore. They are my friends. And that is one of my favorite parts about my work.”