Of Brazil's many unique and often colorful wedding customs — gold shoes, different colored bridesmaid dresses, the groom's tie being cut up and the pieces auctioned off — Brazilian wedding photojournalist Vinicius Fadul thinks having the couple's grandparents serve as ring bearers is the most affecting.

"One of the most emotional traditions for me is when the grandparents bring the *alianças* for the couple," says Vinicius, the 2018 Wedding Photojournalist Association Photographer of the Year. "Here in Brazil, it happens a lot, and it is possible at this moment to feel the emotion of everyone involved — not only of the bride and groom but also of their godparents, the guests, even the professionals like me who are part of that day."

Emotional connections loom large in Vinicius's work. Part of that comes from seeing beauty in what might otherwise get overlooked or even rejected. "After fighting cancer I changed my point of view about life. Everything had a beauty. I discovered that even bad times can become something beautiful, and everything has its positive side," he tells prospective clients. 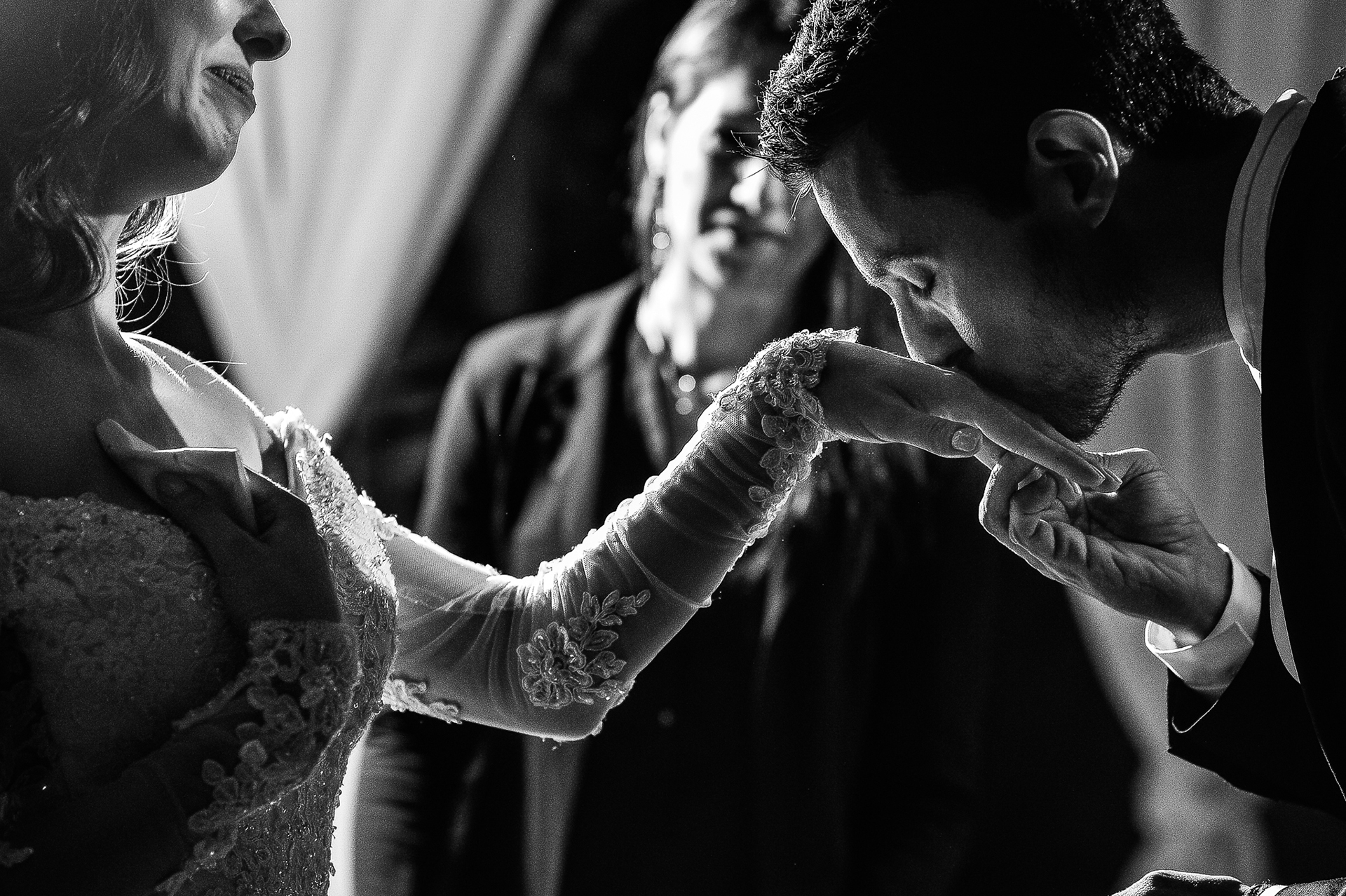 In 2018, Vinicius shot 62 weddings — almost all of them at night, another Brazilian tradition. "We Brazilians prefer to celebrate our weddings at night," he says. "We become more uninhibited and we spend the whole night drinking and dancing. Many wedding celebrations end at sunrise!"

Although a nighttime wedding can pose photographic challenges when one is trying to capture emotion, movement, and settings, Vinicius prefers them. "I love weddings at night! I believe I have more possibilities to create; I have more possibilities to control the light when it is dark than when it is sunny. So at all events I use an external flash and a lighting assistant, which allows me versatility. With a gesture I can control different positions of the light source and this gives me a great creative freedom to do whatever I want." 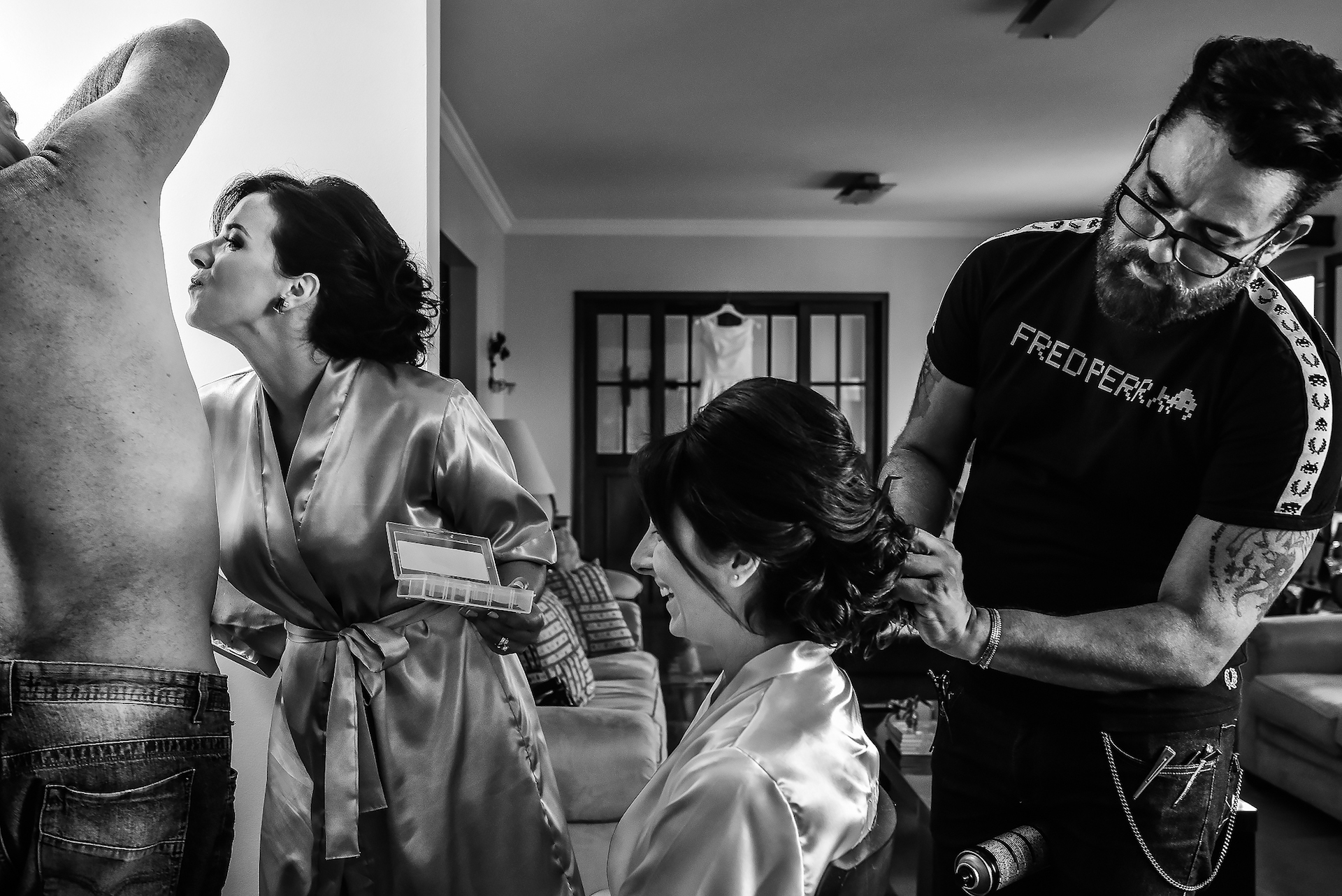 In that light, Vinicius layers human drama and tells larger stories. It can take a lot of shots to get eventually to images that often seem to evoke the Renaissance Old Masters.

"For me it all starts finding the connections between the people," he says. "I look for what makes these people connect and after that, I start to photograph.

"First, I start with just a single layer and gradually add one layer at a time.

"As in a dance, I'm trying to move around to fit all the layers, but that's not the most important thing. What really makes the photo stand out among other photos is to be able to capture that exact moment where it seems that all the layers connect. And for that, it is necessary to photograph a lot."

He says that, for a single scene, he will often take more than 100 photos. "It is a hard process," he says, "where 99 percent of the photos taken are, essentially, sketches.

"I'm never satisfied with the result and I always believe that the photo could be better, so I take a the same photograph several times. And even when I think the moment is over, I stand there a little longer with the camera in my face. 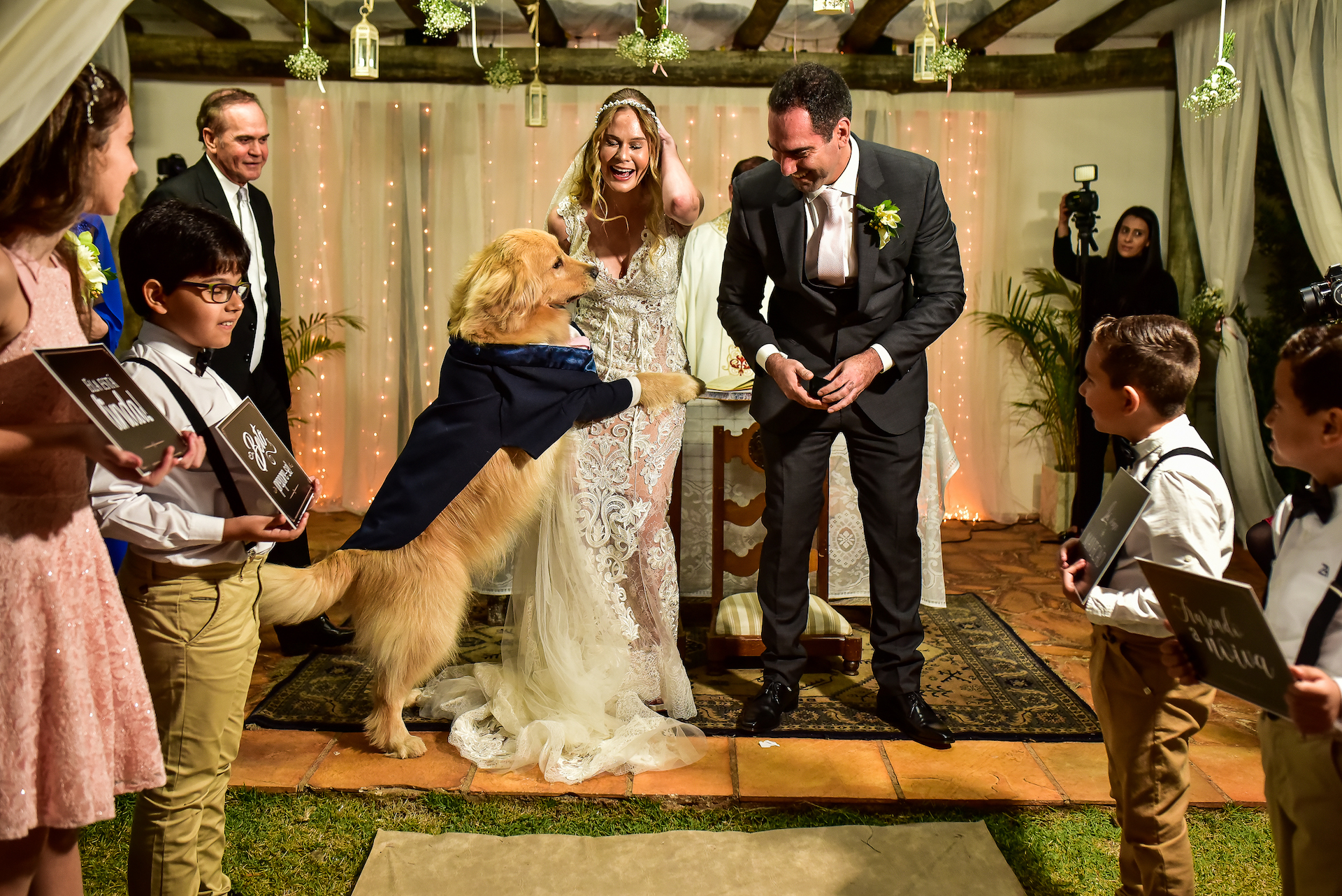 Vinicius Fadul's first job was in advertising, working in graphic design, which he says helped him understand the aesthetic side of images. After his bout with cancer, "I ended up rethinking the way I lived my life," he says. His first love was photography, so he chose to make it his life's work.

"I spent two years of my life traveling the world and photographing for an American company," he says, "which taught me to have a quality standard in every photo I made. But at this time I was photographing only what the company wanted and the way they wanted it."

So when he decided to become independent, he says he "followed all the teachings I learned during those years, but now I would shoot only what I liked."

"I believe that a wedding is one of the happiest moments in a person's life and I wanted to be around people who want to enjoy their lives."

He's proud to be named WPJA Photographer of the Year, just as he relishes his job among the ranks of working wedding photojournalists.

"Our role as photographers is to be always attentive, to pay attention to things that the other guests aren't noticing," he says. "The more we feel connected with those people who are in the wedding, the more we feel that the photos turn out to be 'true,' to show who they really are.

"When I'm photographing, I try to feel as if I were a friend of that person and that I've known them for many years, so I can feel what they are really feeling at that precise moment.

"This way I can get very close and photograph without them even noticing. When I can shoot a moment that occurs so fast that many people do not even realize it happened, it's like an explosion inside me. It's highly addictive!

"When the moment ends and you know you got the picture, you feel that you want do this again and again."