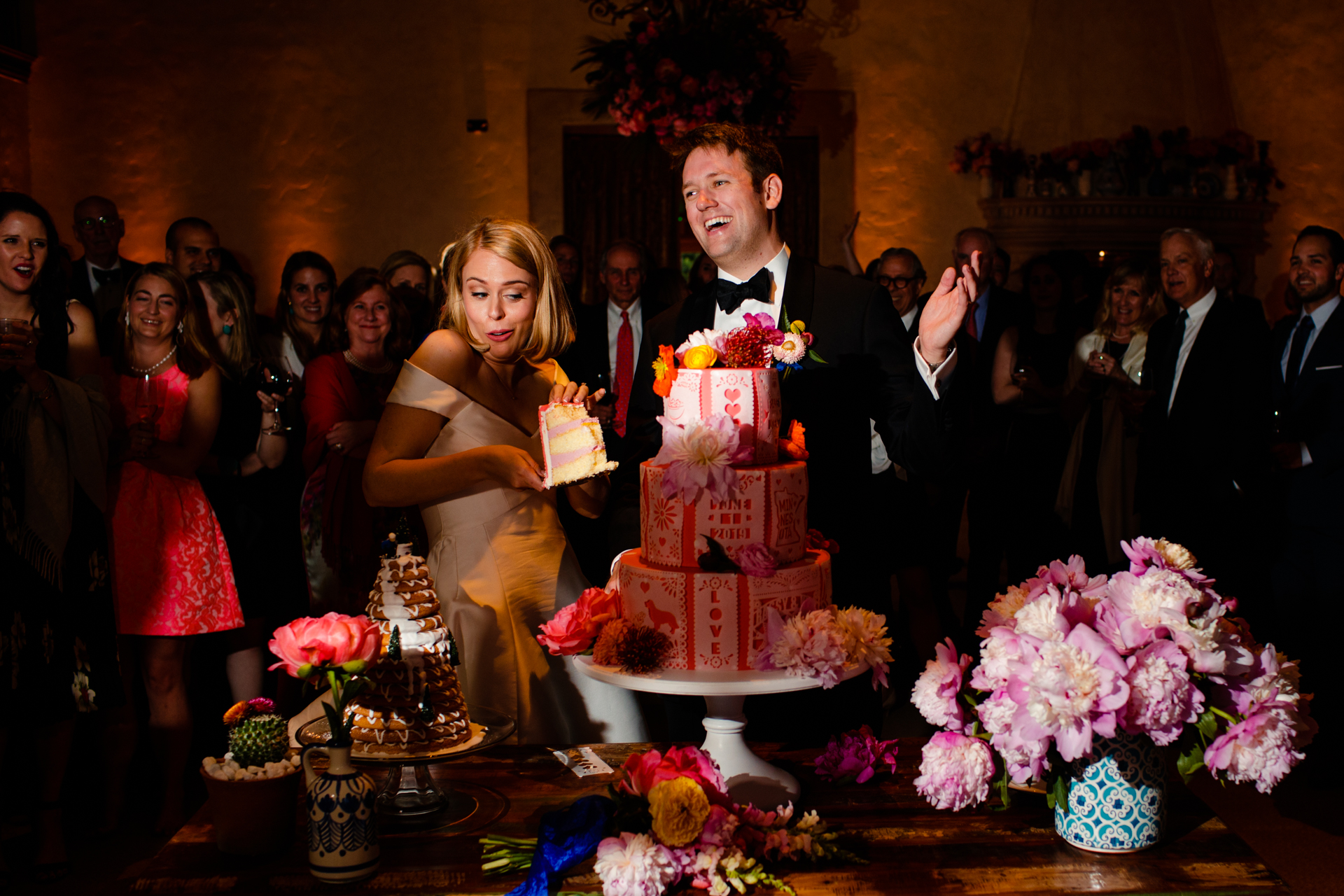 No other tradition during the wedding day should rely as heavily on improvisation as the cake cutting. Those entrenched in the traditional camp may want to offer guidelines on where to stand, how to cut the cake and when to smile for the camera, but their promptings need not be followed for a thoroughly memorable experience.

In fact, not following the “rules” is frequently what makes the cake cutting unforgettable. This time-honored ritual can turn into an entertaining affair with teasing, laughter and affections shared between the newlyweds. Occasionally, things can even get out of hand with couples demonstrating the fine art of smashing their beloveds’ faces with finely decorated, multi-tiered dessert.

Whatever you decide, if you are planning to follow this age-old ritual of cutting the cake, wedding photojournalists are ready to make the most of your experience. We’ve spoken with four WPJA award winners to get their input regarding this timeless wedding day tradition. 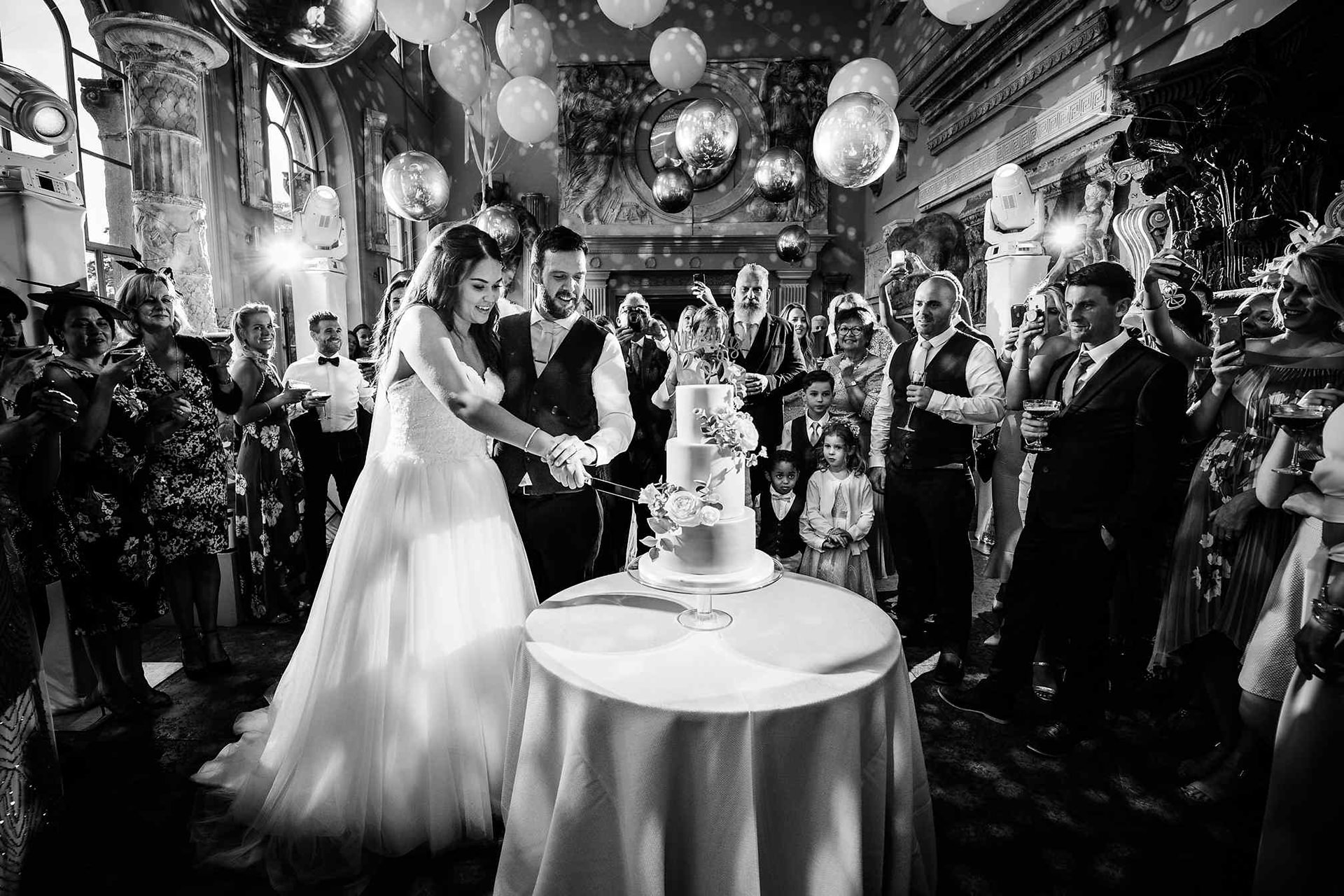 Great pictures are more likely to emerge from a photo-friendly setting, even if the surroundings are not entirely visible in the captured image. The cake is no exception. Some of our WPJA members say that one great setup for the cake is somewhere that’s open so that guests can surround the cake as well as the bride and groom. That way there will be something interesting in the background of every photo, no matter what position it’s taken from. Additionally, the more space you can afford, the more freedom the wedding photojournalist has to move around and capture the cake cutting and feeding from different angles and perspectives.

However, since wedding photojournalists do not give direction to the wedding party or guests, they must work with whatever conditions happen to exist, and they are definitely up to the task. Some of our award-winning photographers have had to work under some rather strange, unexpected, and difficult circumstances. A talented wedding photojournalist is able to capture the photos in such a way that not even Mother Nature is able to detract from. 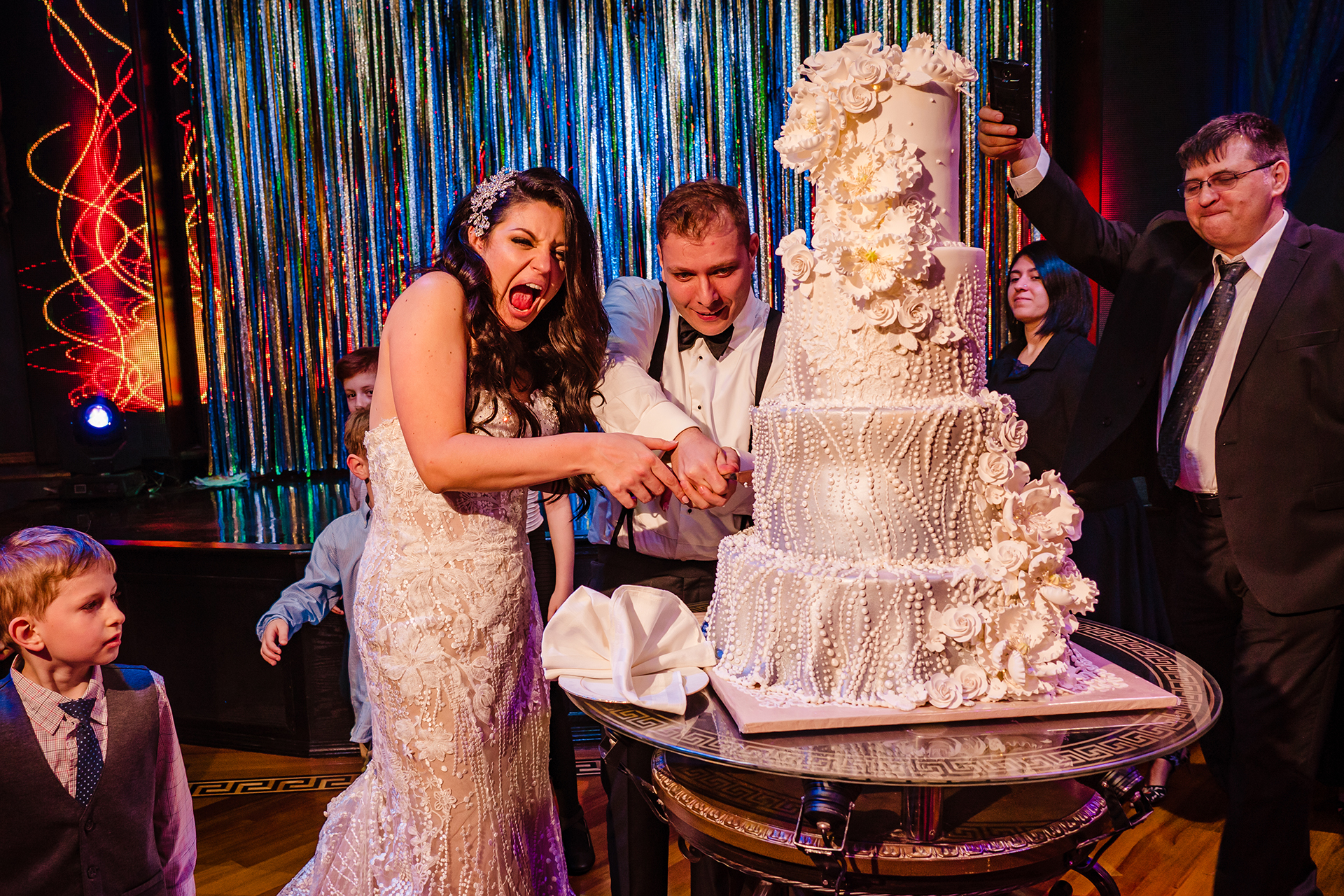 2. TO SMASH OR NOT TO SMASH

Sometime before making your way to your wedding cake and picking up the serving pieces, the question should arise: To smash or not to smash? For some, it seems integral to starting off the marriage on the right foot. They believe that whoever smashes the greatest quantity of cake in their partner’s face will have more control in the marriage. We wish them well…

For others, the grooms, in particular, smashing the cake in their beloved’s face can be the quickest route to honeymooning on the couch, a lonely place. The grooms are frequently the most hesitant as to whether or not they should smear the cake on their new spouse. Somehow, they have not been able to deduce whether the blushing bride will appreciate the joke.

Often, however, to smash or not to smash is a completely spontaneous decision—making it all the more eventful. Either scenario brings out immediate responses. Our members believe that this spontaneity is actually what brings cake cutting photos to life, saying that the best photos they take are when the bride and groom let their guards down and show their real emotions. These true displays of emotion are often unexpected, particularly when the bride and groom are quieter or reserved. However, the cake cutting always seems to bring out the couple’s real feelings and sense of fun and allows them to express themselves without inhibition. It also always makes for an exciting, action-packed photograph!

Our member photographers are no strangers to this cake-cutting dynamic, noting that any number of unanticipated events can occur, from guests banding together to hold down the groom for the bride to have a clear and open shot, to couples coming away covered in in frosting and cake, sometimes even taking a toll on hair and makeup. Speaking again to the lack of inhibition that consistently seems to come over the couple during the cake cutting, they seem not to care at all about all those meticulous hours of planning and getting themselves ready once the prospect of shoving cake in one another’s faces is in their hands. However, it is for this exact same reason that our members recommend that you know, ideally in advance, what your limits will be; where will you draw the line and what are you willing to potentially sacrifice for your grown-up food fight. Some members said that when their prospective clients see pictures of grooms plastering the bride’s face with cake, they tell their fiancés to not even think about it.

If getting smeared with cake is not what you anticipated when you said your “I dos,” then there are other ways to keep the cake cutting from getting out of hand. WPJA members have noticed that usually when the cake is brought out earlier in the evening, the entire event remains well organized and in control. Conversely, when it happens late in the evening (when libations may have been freely flowing for a longer time), things can get a little crazy. 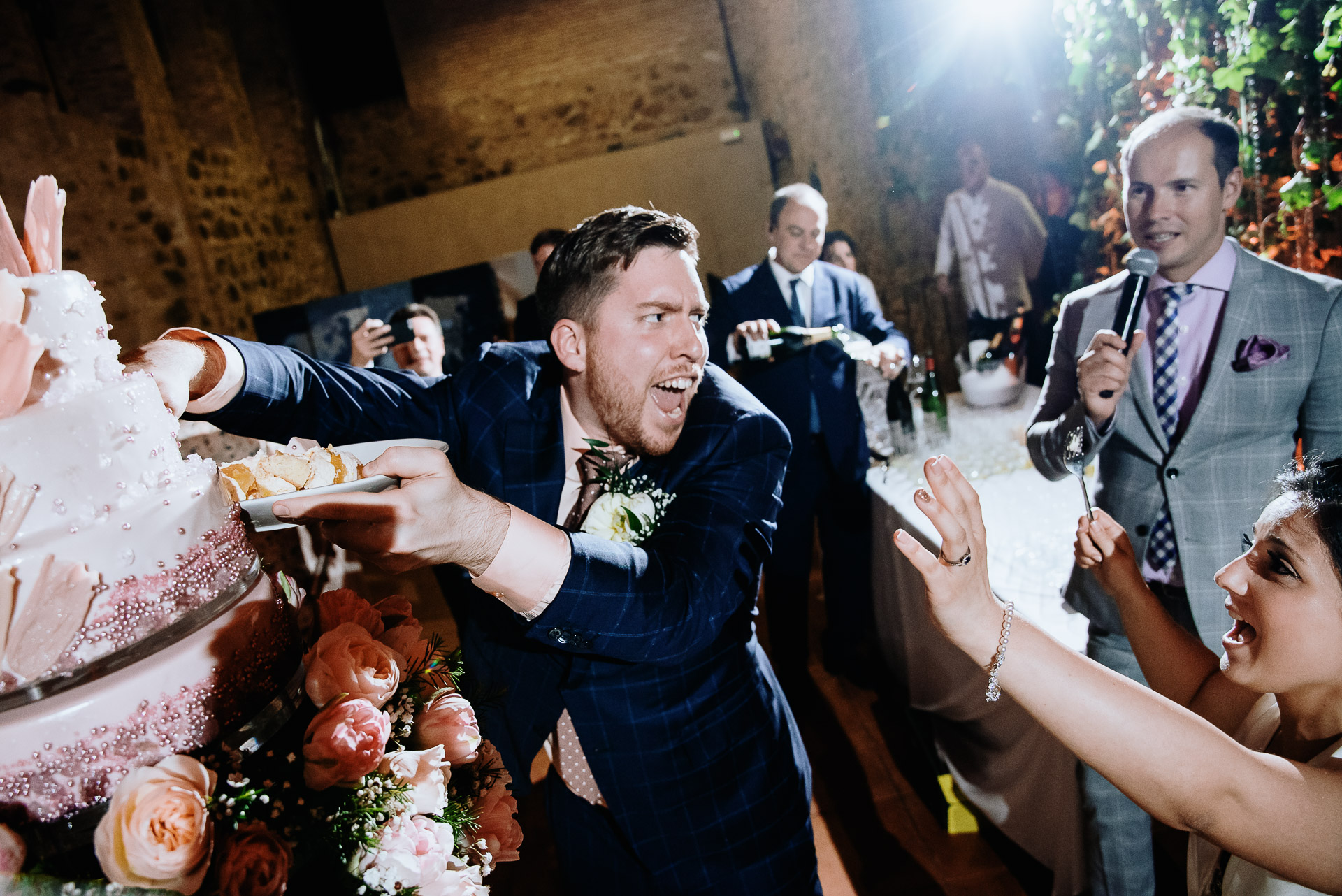 The personality of the couple shapes much of the wedding. The cake cutting ritual, in particular, is an opportunity for their inner selves to take center stage. Our members have expressed that they enjoy when the cake cutting involves action, reflecting fondly on brides trying to take the largest piece of cake possible with the belief that this will give them more control in the marriage. In addition to the action, the cake cutting seems to have a way of bringing out joy and revealing the personality of the couple.

Wedding photojournalists tend to have different opinions about what makes good cake-cutting photographs. Some of our members prefer when the couples go crazy, as it’s more fun for everyone when they let go and enjoy themselves, saying that is rather difficult to capture memorable photographs when the couple is rigid and uptight. Perhaps some of the best advice they are able to offer is that you should ignore the camera and just be yourselves.

As with many of the wedding day activities, it’s most important to relax and let things fall where they may. Though if you’re adamantly against cake smashing, it’s a good idea to tell your fiancé before the wedding. Otherwise, you may be stuck with an experience you wish was not so uniquely yours. 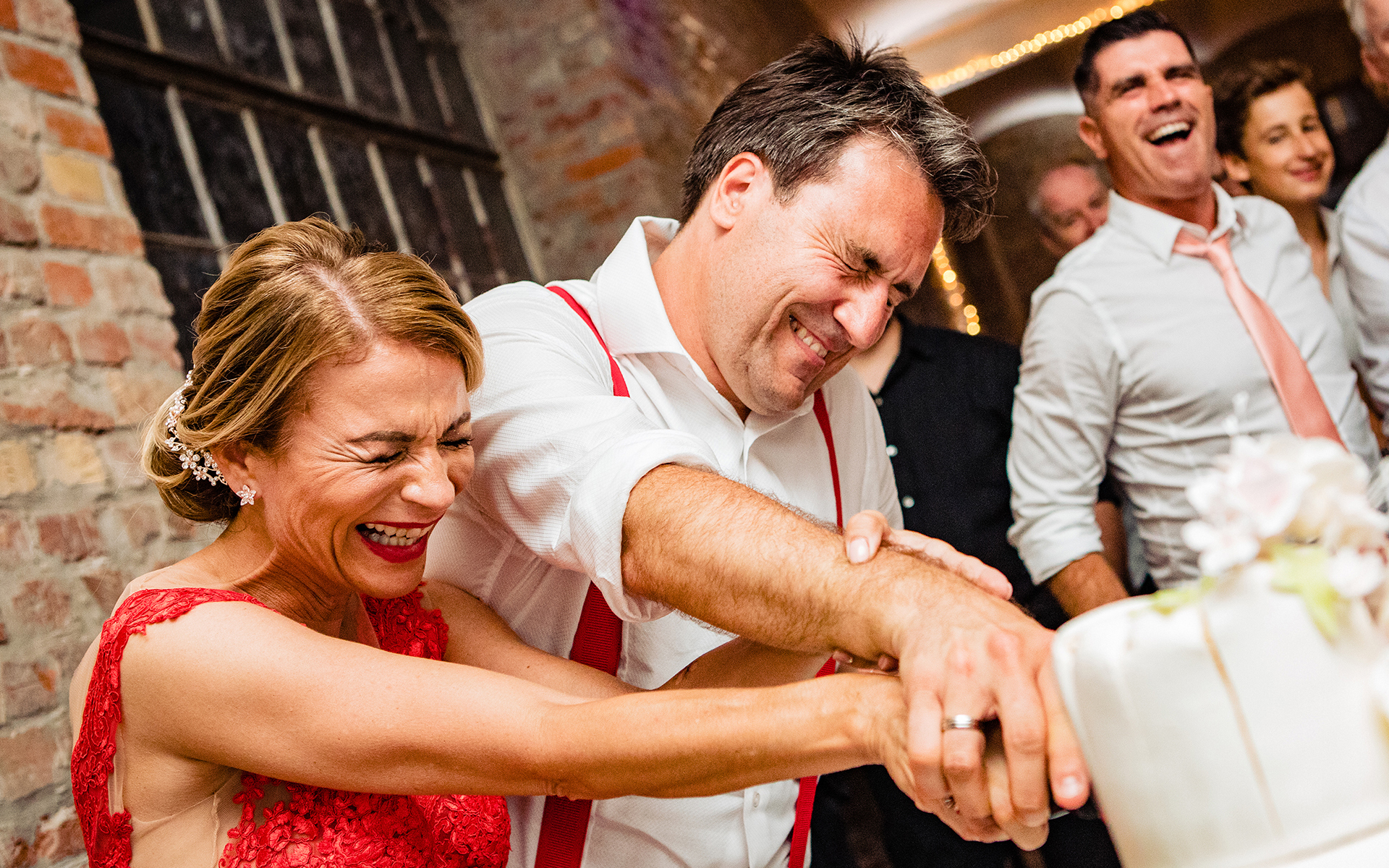